The housing market is finally making a turn around in Florida, despite the state being racked by one of the highest foreclosure rates in the U.S. Miami home and condo sales are reaching 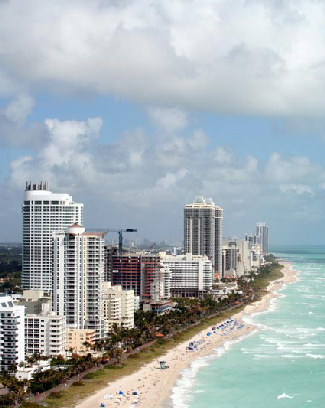 Condominium and home buyers searching for discount deals on property from South America, Europe and even the Middle-East are making cash purchases of real estate at what may be an unprecedented level. Miami holds a rare distinction in terms of international attraction for foreign buyers, with its rich mixture of cultures from around the world.

The influx of buyers has produced the largest increase in property sales for any U.S. urban area and is producing a recovery for the region from the hardest housing crash since the 1920s even prior to the Great Depression. Miami is now forecast to complete 2012 with average housing inflation, including condos of 8.4%.

The volume of sales may slow over the course of the rest of the year in the Miami region, but Ft. Lauderdale to the area’s north should see better sales as buyers look for surrounding areas to make their home purchases. Ft. Lauderdale is projected to experience average inflation in housing at 5.2%.

The turn around is also developing in hard hit Fort Myers, one of the nation’s foreclosure epicenters. Home prices are on the rise in Fort Myers and adjoining Fort Myers Beach, where some appraisals are coming in under what properties are actually selling at and buyers are paying more than the list price in some cases.

The economy is on the mend in Fort Myers, despite an unemployment rate that competes as one of the highest in the state. After six long years in the throws of a disastrous market, the region is experiencing better times.

REO properties controlled by the banks are in short supply, with fewer coming to the market for sale. Abandoned homes are being bought up and more locals are finding work. Fort Myers is forecast to see home values increase an average of 3.7% by years end.

In hard hit Naples, a similar trend in developing. The inventory of homes and condos has been slashed and prices are slowly moving upward as the market adjusts to better times ahead, despite a back-log of foreclosures waiting to be listed by banks.

Naples is one of Florida’s oldest and most revered vacation resort markets, and its rebound should be forceful. Lower priced condo sales should make up the brunt of the recovery at first, followed by the single family home market. Average home and condo values are projected to increase 3.1% for the year.

Banks are showing signs of offering more homeowners at risk of foreclosure the chance to sell their homes as short sales in Orlando, which should pave the way for higher prices to develop. Orlando home values are forecast to inflate an average of 2.4% by years end as the market makes greater inroads towards recovering.

In larger Tampa, home and condo prices have been rising during the first part of the year. But the over-built Tampa market is seeing its inventory of homes decline, despite a pent up inventory of foreclosures expected to hit the market later this year. Home values in Tampa, however are forecat to inflate in value an average of 4.6% by the end of the year.

In the state capital, Tallahassee sales have increased but not enough to save the market from its historic making fall projected to reach another 4.6% deflation in home values in 2012. But that won’t be close to the decline that one of the finest resort markets in the country, Destin is forecast to suffer as it recovers from the crash with 6.1% in housing deflation in 2012.