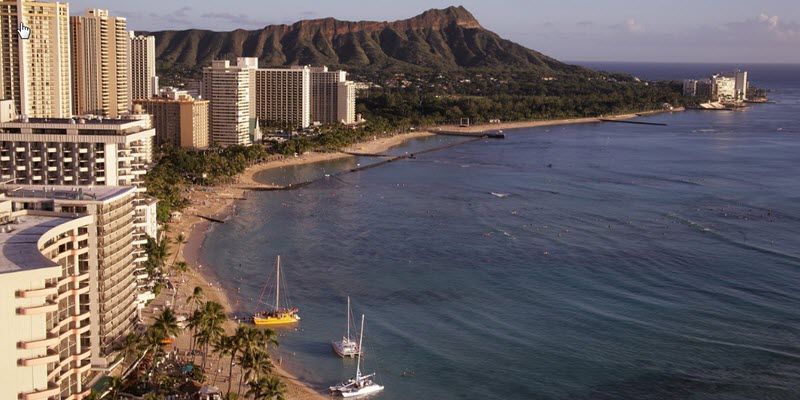 Hawaii is America’s 50th state, and the most recent state to be added to the Union. It received statehood in 1959. Hawaii is the only state in America that is comprised entirely of islands, and it’s clear that its residents have the island life down. The scenery is beautiful, the weather is warm and tropical, and there are always some major waves to be had.

It is comprised of eight main islands and thousands of smaller islands that form the Hawaiian Archipelago. With just over a million permanent residents on the islands, it is the 8th smallest state in America and the 11th least populated. That means there are plenty of free spots on the beach to catch some tropical sun rays.

This smaller population could be due in part to the high cost of living and high taxes associated with Hawaii. Residents pay nearly three times the national average for their electricity. Things that mainlanders often take for granted like shipping charges and airline tickets are also part of what makes life on the islands more expensive.

In a ranking of one hundred United States metropolitan areas, the city of Honolulu ranked 67th in terms of predicted home sales and price growth. It experienced a 3.11% growth in price and a 1.43% growth in sales over the course of last year.

The forecast for home values is predicted to rise 3.5% over the next twelve months nationally, and 4.9% for Honolulu, Hawaii’s largest city.

The Hawaii housing market in Oahu continues to be among the most expensive in the country with a median home price that hovers around $755,000. This number means that homes in Oahu are nearly three times the price of the average American home. Single-family home prices in Oahu rose 2.7% from 2016 to 2017, and experts predict the median price there could rise to almost $800,000 in 2018.

The Republican tax plan proposes to lower the mortgage interest rate deduction from $1 million to $750,000, which could affect areas like Oahu, where the median house price is $750,000. That would mean nearly half the buyers, who purchase homes above that median price, would lose out on the tax deduction.

The Hawaii housing market has long been in a perpetual state of feast or famine. It’s perfect for the ultra-rich but can often provide little in the way of options for a population largely employed in the service and hospitality industries. 2018 may see a change as more investors turn to smaller homes of just two and three hundred square feet as a way to provide more affordable housing.

Best Places to Live in Hawaii

Honolulu is the largest city in Hawaii, and it also serves as the capital. Its name means “Sheltered Harbor,” and it enjoys some of the highest livability ratings of any city in the country and a low crime rate. The city’s location allows it to act as a tourism gateway to the rest of the islands, as well as a commerce bridge between the Eastern and Western worlds.

Its median home price is among the highest in the country, but paradise simply doesn’t come cheap.

For a less touristy, and more authentic town, Paia is a favorite spot for many Hawaiians. It offers an artistic scene, a small town vibe, and easy access to the beach. There are currently only eight homes for sale in Paia, so inventory is a problem here as with many other places.

The median listing price is $799,000, but that is down considerably from the $2.2 million median price of just last October. The small Paia market makes it harder to predict than say the market of Honolulu, which has made small but steady increases.

Hawaii seems poised to enjoy another year of steady growth in terms of median home values, and it will remain one of the most expensive places in the country to live.