Perhaps surprisingly, Ohio is the country’s 7th most populous state, and the 10th most densely populated state in the country. Its scenic rolling hills and idyllic farms mask that it has bustling cities, booming suburbs, and a lot of people. For those who thought Ohio was simply a land of farms in sprawling interstate, there are a few things to learn. 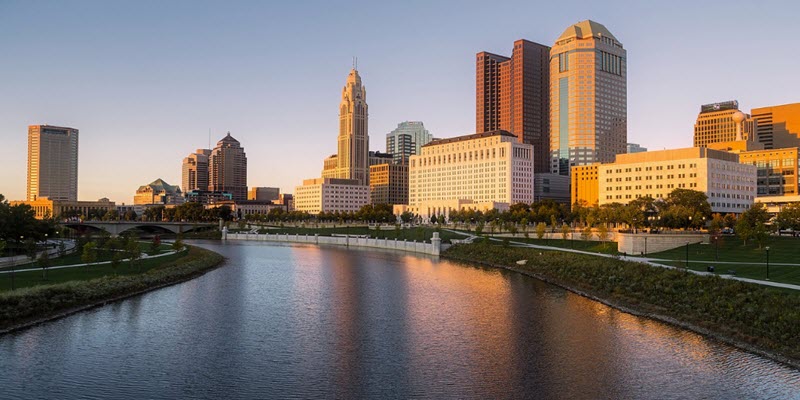 In real estate, location is everything, and Ohio’s position as a link between the Northeast and the Midwest gives it plenty of business revenue. It has a superior roadway system that is the 10th largest highway system in the country. This means the state can earn a lot of revenue from transporting goods, and as a thoroughfare from the East to the West, Ohio sees its fair share of goods.

The 17th state of the Union is bordered on the North by Lake Erie and on the South by the mighty Ohio River. It’s known as the Buck Eye State for both its Buck Eye trees and the mascot for Ohio State University which is located in the state’s Columbus capital.

So in a state that prides itself on the football prowess of its top school, consumers want to know if the 2018 Ohio housing market is set for a winning touchdown or a fumble. How will the Ohio housing market behave in 2018, and what factors will affect it?

As of December of 2017, the unemployment rate for Ohio was at 4.7%, just slightly above the national average of 4.2% with cities like Cleveland experiencing a much higher rate at around 6%.

The median home sale price for Ohio is $130,659, up 6.4 percent from last year, but the number of homes for sale has declined again. The home inventory for Central Ohio has been declining for eighty-five months, making it harder and harder for buyers to find homes.

Still, Zillow predicts a 2.9% increase in median sale prices over the course of 2018 but gives Ohio an overall unhealthy housing market rating. With more than 11% of homes with a negative equity, and 1.5% of homeowners delinquent on their mortgages.

Inventory is a recurring theme in the United States housing market. Central Ohio inventory is reportedly at record lows. Central Ohio housing inventory continued to decrease in January of 2018 to 3,410, which is 12% below December of 2017 and 21.2% less than January 2017. This declining inventory leaves central Ohio with a 1.2 months supply of inventory if the sales pace remains unchanged.

This decreased inventory also drove sales in Central Ohio down 11% in January from the same time a year ago. Even in a seller’s market, homes sales can’t pick up if there aren’t enough homes for sale.

Best Places to Live in Ohio

Columbus, the capital of Ohio is home to Ohio State University, a strong economy, and a growing population. Columbus’s median home prices have been on a sharp incline over the past few years.

In fact, according to Zillow, with a median home value of $145,659, Columbus home values have gone up 11.0% over the past year. Zillow forecasts that they will rise 4.3% over the course of 2018. The median list price per square foot in Columbus is $113, which is lower than the Columbus Metro average of $124. The median price of homes currently listed in Columbus is $159,500 while the median price of homes that sold is $150,600

Cincinnati is another popular Ohio destination. It has a burgeoning population of 298,800, making it the 3rd largest city in Ohio, and the 65th-biggest in the United States. It is also the fastest growing economic power in the Midwestern United States.

Zillow gives the city a warm market temperature. Cincinnati home values have gone up 6.3% over the past year and Zillow predicts they will rise 3.2% within 2018. Although much of Ohio is experiencing lower inventory and a hot seller’s market, Cincinnati residents benefit from a more balanced market that gives only a slight upper hand to the sellers.

Ohio can expect to benefit from steady increases in home values over the course of the coming months, but the success of the Ohio housing market may be hampered by its declining inventory. The eighty-five-month decline that the market has been experiencing shows no sign of slowing, and it may increasingly favor the seller. This may increase prices, but overall home sales may slow in 2018 until the state can find ways to bump up its home inventory.