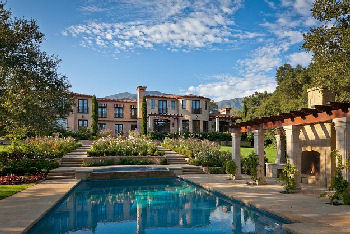 U.S. that is seeing luxury home sales above at least $1 million soar.

“It’s like someone flipped the switch,” said Santa Barbara, California Realtor Rebecca Riskin, who specializes in the affluent Montecito area of posh Santa Barbara. “In the past few years we worked tirelessly to no avail. We would show properties, but the buyer felt no urgency to make a purchase. Now that has changed.”

Riskin and other real estate agents have seen the luxury high end Santa Barbara housing market pick up the pace the best in the last five years, placing 12 properties in escrow in the last three months totaling $81-million, including some of the area’s most renown estates. “Buyers sense that we are at the bottom,” said Riskin. “And they feel safe putting their money back into real estate.”

Whether the high end Santa Barbara market is at the bottom of the market or remotely close may not be material considering U.S. luxury home sales. The high end market averaged a drop of 65% in values above $1-million in California since the markets peak. Santa Barbara, with its Pacific Ocean views and near year-round sunshine saw some of the states highest deflation.

Closer to Los Angeles, in the Santa Clarita Valley existing home and condo sales have seen the strongest rebound since 2007 the last two months, according to the local multiple listing service.

The Southland Regional Association of Realtors, says sales of single family homes were up 19% in February over year ago figures. But home prices are still declining, despite near record low mortgage rates and better news about the overall economy.

The trend in better sales in the high end market is also evident in Denver, Colorado’s luxury home market. But low inventory triggered by underwater homeowners who are unable to break even or sell their homes for more than what they paid may have a slowing impact on the region.

Some 31 homes with selling prices above $1-million sold in February in the Denver area compared to 27 during the same month a year ago.

“The high-end market in the Denver metro area continued its gradual but steady improvement last month, along with the overall housing market,” said Coldwell Banker Residential Colorado president Chris Mygatt. “We have gained momentum over the past year and probably would have greater sales gains if we had the inventory to meet buyer demand.”