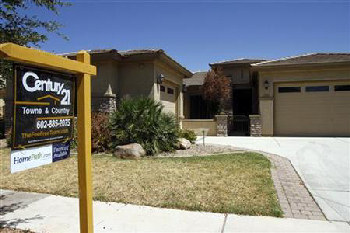 month in June as consumers remain skittish about the U.S. economy to a seasonally adjusted rate of 4.37 million units. The usually busy summer selling season has gotten off to a slow start.

The sale of single family homes, condominiums and townhouses dropped 5.4% for the month, but still remain 4.5% higher than last year at this time, according to the National Association of Realtors. However, growing concerns about the world economy and a lack of job hiring by employers continue to strain the U.S. housing market.

Median salaries paid to workers also hold the housing market back from making a full recovery in many regions of the country, despite higher prices being paid for homes and many other properties in some regions. A tight inventory of homes for consumers to choose from also troubles the market in many areas.

The national median existing home price was $189,400 in June, up 7.9% from a year ago, the NAR said. The median price, however, is only the halfway point at which homes sell and is not representative of all prices being paid for homes in any market. Housing appreciation is developing in many areas of the nation but is at a much lower rate than indicated by the median price.

Foreclosures and short sales sold at deep discounts, accounting for 25% of June sales across the nation, and were much higher in hard hit cities like Las Vegas, Miami and Phoenix, where sales have been in an upward trend for the year.

The pent-up demand for cheaper homes is driving most of the market’s sales as consumers, especially first time buyers and investors seeking bargain priced properties shop for deals.

“Buyer traffic has virtually doubled from last fall,” said NAR president Moe Veissi. “The very favorable market conditions are helping to unleash a pent-up demand, which is why housing supplies have tightened and are supporting growth in home prices.”

Inventory fell another 3.2% in June to 2.39 million existing homes for sale listed by Realtors, representing a 6.6-month supply at the current pace of sales. The inventory is 24.4% below a year ago when there was a 9.1-month supply.