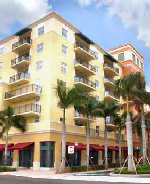 estate crisis. So there seems to be little sympathy for them these days but they also have their problems, particularly if they own multiple properties.

Even more so if they bought when the market peaked in 2006. It is not unusual for these properties to now have mortgages that are higher than what the property’s worth.

“Everybody was an investor then,” said Roger Soderstrom, president and founder of Sotheby’s International Realty. “It didn’t matter who you were. Just about anybody could get a loan.”

This was the era, after all, of a popular TV show called “Flip that House” and a condo Web site with the slogan: “Bubbles are for Bathtubs.” There were cases of buyers applying for more than a dozen loans saying they lived in each house.

“I suppose you could buy up to 30 investment properties and claim you were living in each one day of the month,” said Jay Brinkmann, chief economist of the Mortgage Bankers Association.

Figures from that group show that about 22% of the foreclosures in Arizona, Florida and Nevada came from investor-owned properties, and Housing Predictor surveys indicate the number of foreclosures owned by investors is rising at an unprecedented rate.

Speculators were especially active in the more lucrative high end housing market. A major attraction was the easily available credit. Many of these speculators thought there would continue to be strong demand for bigger and pricier homes until the credit crunch hit and Wall Street stopped filling the orders for mortgages.

So what do the speculators and “flippers” do now? It’s a challenge, agree real estate experts.

“The first thing to do is go talk to your bank and be honest with them about what issues there are,” suggested real estate attorney Terry Delahunty. “It’s human nature to try to avoid this type of honest discussion.”

While single-family investors often complain they can’t even reach lenders to discuss a deal, speculators who own multiple properties are more likely to receive an attentive audience simply because more money is involved.

“The banks don’t want their property back. They want to find a way for you to keep the property,” Soderstrom said.

Delahunty emphasizes that speculators have to be realistic. “If you go to your banker and it’s obvious you can’t show any way to pay off your mortgages, there is not much they can do for you,” he said.

Almost all options begin and end with the lender. Speculators in large part have options similar to borrowers concerned about single homes. They can:

a. Ask their lender to delay foreclosure to give them time to sell.
b. Ask for forbearance with the lender agreeing to put off foreclosure
for a short time in return for future payment of the past-due amount.
c. Get the lender to agree to a mortgage modification, which involves a
smaller and more drawn out repayment plan.

Another option if the lender turns a deaf ear is to rent. Of course, there’s an oversupply of rental property in many markets. Ironically, and perhaps justly, the speculators are now joining this value-reduced market they have helped to create.