The federal $100 home deal that started out in one of the nation’s hardest hit foreclosure centers is expanding into more states. The move is part of government efforts to revitalize neighborhoods devastated by the foreclosure crisis. 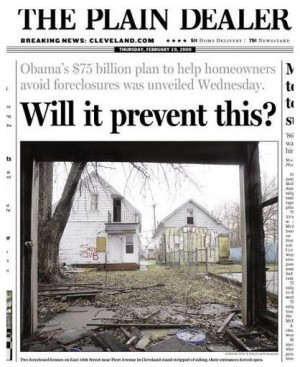 The program was launched in Cleveland, Ohio allowing non-profits to take control of homes that were foreclosed as a result of mortgages that became unaffordable for their former owners. The agreement gave the city of Cleveland the first opportunity to buy the homes for just $100 after they were listed on the open market for six months without being purchased.

It resulted in the purchase of just 441 Cleveland homes, according to the Housing and Urban Development Department (HUD), which is administering the plan to rehabilitate or demolish homes. But the program ran into trouble with delays until Congress pushed for a provision to expand it into East Cleveland and other hard hit areas of the community, including Shaker Heights.

“As we work to rebuild our communities devastated by the housing crisis, it’s critical that our efforts aren’t undermined by out-of-state speculators,” said Senator Sherrod Brown (D-Ohio). “A local response to the housing crisis is in the best interest of Ohio communities and our nation’s economic recovery.”

“Now that we have proven that these efforts work in Cleveland we hope to do the same throughout Cuyahoga County,” said HUD Secretary Shaun Donovan. The expanded program will now leverage $41-million that the county has been awarded from the neighborhood recovery act as part of TARP.

Communities in Florida, New York and New Jersey are also being given priority to buy the mostly dilapidated homes for just $100 a piece to do whatever they want with them. Most of the homes are valued at less than $20,000 in the current marketplace.

The efforts are also an attempt by local governments to keep investors out of the market from buying lower priced homes in many neighborhoods that already have high crime rates.

Under the renewed agreements HUD will sell hundreds of Cleveland area foreclosed homes at deeply discounted prices, most of which have been abandoned. But local government officials will get first dibs on the properties before they are listed.

“First, we will inform the Corporation (City corporation developed for purchasing the homes) of all our newly acquired properties and then provide initial inspections prior to a public listing,” said Engram Lloyd, acting director of HUD’s National Homeownership Center. “Then we will give CCLRC the exclusive opportunity to purchase these homes for as little at $100.”