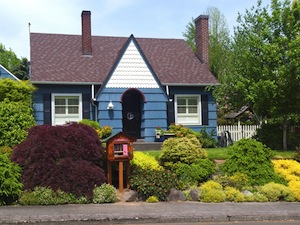 By the end of the year, Oregon home prices are expected to dip 0.95 percent. That´s compared an average increase of 0.17 percent in U.S. home prices.

Meanwhile, Arizona´s home prices are expected to increase the most at 5.65 percent, and Georgia’s to decline the most at -4.46 percent.

Historically, Oregon´s highest annual real estate appreciation rate was 30 percent in the 12-month period that ended in the third quarter of 1977. Four years later, the state its worst annual rate, at -12 percent. The Oregon House Price index is only available as far back as the first quarter of 1975.

The picture in Portland, Oregon’s largest city, is significantly brighter than that of the state at large. “January started off in the right direction with a 15.5 percent increase in the average sales price and a 19.5 percent increase in the median price of homes in the Portland Metro area,” said Kevin Begemann, a Realtor with ePro Realtors. “New listings were down 6.7 percent, pending sales were up 4.6 percent and closed sales were up 9.8 percent making the inventory level at 4.7 months of supply. Last year January was at 7 months and in 2011 inventory was at nearly a year. A good indication of how quickly things can change.”

According to the Oregonian newspaper, many homeowners who had wanted to sell several years ago, but were deterred by the market slump, are making their move now. An article published on March 4, 2013 reads: “‘There’s a lot of people who were underwater who are now not underwater,’ said Nick Krautter, a broker with Keller Williams Realty in Portland. ‘We’ve got a lot of clients who have been waiting to sell, sometimes for years. The price moved up enough they’re able to make the move they want to make.’”

While Oregon’s residential real estate inventory is as low as it was at the height of the real estate bubble, it is now owing to a light supply rather than heavy demand.

Experts attribute this to plummeting foreclosure-related listings. The recent Oregonian article continues: “Bank-owned listings declined 73 percent from a year ago, and listings for short sale – in which the homeowner sells the house for less than the amount owed on the mortgage, and the lender agrees to forgive the difference – fell 53 percent. Last February, distressed listings made up 37 percent of home resale listings. Last month, they were less than 15 percent.

Part of the decline may be temporary, as banks start directing foreclosures through the court system. An Oregon Court of Appeals ruling last July complicated the out-of-court system lenders have traditionally used.”

Foreclosures that are funneled through the court system generally take longer to play out, which has created a bottleneck in the process.

The leap is even greater from January to February of this year. That month, court foreclosures in Oregon counties climbed 67 percent, according to Gorilla Capital, which buys distressed real estate.

A recent article in Oregon’s Statesman-Journal newspaper reads: “‘We can expect to see a steady rise in the number of homes sold at sheriff’s sales in the months ahead,’ said John Helmick, of Eugene, (Ore.)-based Gorilla Capital. ‘The processing of these foreclosures is a necessary prerequisite to the healing of the Oregon housing market.’ … A large number of foreclosures have been waiting to enter the pipeline. New foreclosure filings are at the same level as in the first half of 2012, before the foreclosure process in Oregon transitioned primarily to the courts, Helmick said.”

Foreclosure developments in Oregon are having other effects on troubled homeowners. A March 11, 2013 article in RealEstateRama reports that U.S. Sen. Ron Wyden (D-Ore.) recently urged the U.S. Attorney General to investigate allegations that a mortgage servicing firm is overcharging struggling homeowners on default and foreclosure fees.

According to the article, “‘Not only is the thought of making it harder for struggling homeowners to reinstate their loans appalling, but charging for fees already being paid by a government-backed entity such as Fannie Mae is illegal under the False Claims Act,’ Wyden wrote in a letter to Attorney General Eric H. Holder Jr.”

Wyden said that a mortgage industry professional contacted his Portland, Ore. district office to relay concerns about homeowners being overcharged for service fees relating to default and foreclosures.

The article goes on to read: “Mortgage investors contract banks and other entities to service their investments. In exchange for a portion of the interest homeowners pay on their mortgages – typically 1 to 3 percent of the total interest payment – these ‘servicers’ are responsible for collecting payments and for ‘default servicing,’ which can include property preservation, sending breach of contract letters and completing claim forms. Legal fees are the only expense not covered through homeowners’ interest payments and are the only cost that can legally be passed back to investors and homeowners. Industry experts told Wyden’s staff that Lender Processing Services, Inc. (LPS) provides default services to banks and mortgage companies. LPS then partners with law firms, which, in turn, pass along ‘legal fees’ to investors or homeowners, which are never fully detailed or explained. Neither the homeowners nor investors are made aware that the broadly claimed legal fees may include the cost of services that have already been paid for out of the homeowners’ interest payments. ‘Borrowers are simply told that they need to come up with more money to save their homes,’ Wyden wrote.”