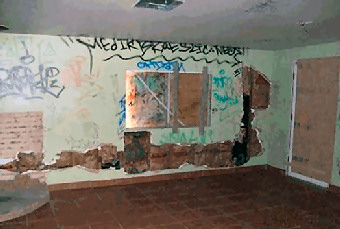 foothold in the security business as it uses the advanced technologies its developed to secure homes.

VPS entered the Las Vegas housing market to sell its services since the region is regarded as ground zero in the foreclosure crisis.

“I can’t count how many vacant REO properties I have shown that are vandalized and missing everything from appliances to copper wire,” said Tim Allen, the company’s district sales manager. “It never ceases to amaze me at how far thieves go to steal from these properties.”

Damage to homes left vacant in the wake of homeowners who can no longer afford to pay their mortgage leaving homes empty has reached epidemic levels in the U.S. so much so that the term “Urban Mining” was coined for the practice. Banks are losing millions of dollars in property damage each year as a result. Las Vegas alone has an estimated 100,000 homes that will go through foreclosure in the next decade.

The company secures homes with a 14 gauge steel panel system, and digital locks on the doors to keep the thieves and vandals out, but allow real estate agents to gain access to show the properties when they are listed for sale.

“We have a wireless alarm monitor that requires no power in the property. It has a battery life of five years and will contact the designated person the minute the property has an unauthorized entry,” said Allen. “It also has a key pad for Realtors to arm and disarm. In addition, we offer a revolutionary air conditioning cover to prevent theft of air conditioning systems.”

Vandals sometimes break into vacant homes at late night hours to steal appliances, air conditioners and even electrical wiring, which they then sell. The firm has gained the attention of the nation’s mortgage giants, Freddie Mac and Fannie Mae and banks for protecting homes in some of the country’s hardest hit foreclosure capitals.

Workers clear overgrown shrubs and weeds and clean up homes with other debris and damage, including graffiti. The company says there isn’t a problem that’s too big or small for it to handle.