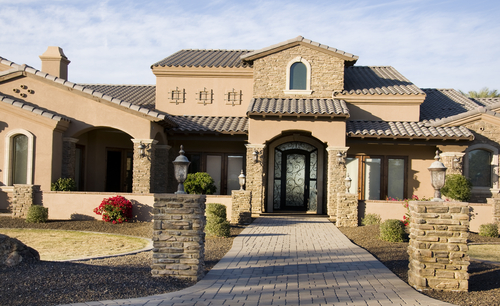 From that year until 2012, Arizona home prices fell 49.0 percent. In fact, with the exception of Nevada, the state may have suffered the most during the recent economic recession.

According to RealtyTrac, the state continues to suffer the second-highest foreclosure rate in the nation with one of every 346 housing units having a foreclosure filing in July of 2012.

Still, as the rest of the country experiences an improvement in the real estate market, Arizona appears to be reviving as well. As of early this year, Arizona’s home prices have increased by nearly 17 percent, with its median home price at $248,229.

Tuscon Realtor Brenda O’Brien reported in Realty Times that in Tuscon homes are spending an average of 58 days on the market. “February was extremely good, and March is shaping up very good also. All our listings are getting lots of showings and are selling at a good steady clip with lots of buyers in the market. People understand these current market conditions aren’t going to last much longer.

“While there remains some lingering uncertainty about the economy… the real estate market continues to improve, especially in the Sun Belt states like Arizona… Tucson continues to have lower than normal amounts of housing inventory and stiff competition for the premium properties.”

According to O’Brien, Tuscon’s active listings in March were at 4,325, down 134 units from the previous month. Meanwhile, the February average sale prices was $186,482, up 13.35 percent from the previous year. “Another month of year over year price increases,” she wrote. “We expect this trend will continue well into 2013.”

The Tuscon Association of Realtors’ March 2013 report indicated the following:

In January, AZFamily.com published an article about the real estate forecast for Phoenix, Ariz. The article read in part, “3TV’s Kristine Harrington went to the experts for a glimpse into the 2013 housing market forecast. She found that the outlook is positive, with home prices expected to rise.

“Realtor Kelly Cook with Keller Williams says he expects real estate in 2013 to be even better than 2012. ‘Foreclosures have almost completely fallen off,’ Cook tells us. ‘They are less than ten percent of the market right now.’

“And that is forcing prices to climb. Buyers are turning out in great numbers right now, motivated by the still affordable homes and the historically low mortgage rates.

“But with inventory moving quickly, Cook says some buyers are still struggling to find the right fit. ‘You’re seeing a lot of people having to settle for a house they don’t really want,’ Cook says. ‘That’s because 3 months ago they could have had this, for that, but it’s not available anymore; it’s gone. It’s a thing of the past,’ Cook says.”

Phoenix Realtors Gary and Claudia Scott predict a sunny future for Arizona’s real estate market. “The long-term outlook for Phoenix remains very positive, with some experts forecasting a population increase of nearly 60 percent by 2030,” they wrote in a recent blog. “The interest rates are low and the recovery is in it’s beginning stages. Prices are still ‘low’ as compared the high values set in the housing boom. There are still some excellent opportunities for savvy investors who take the time to become familiar with the market changes to purchase the best opportunity for appreciation. Make careful choices and weigh out the costs and benefits of your actions.”

RealEstateRama.com published a column in March suggesting that Major League Baseball’s Cactus League, composed of teams that call Arizona home, may offer the real estate market yet another boost. The league, it turns out, has spiked the state’s tourism by 36 percent. The column reads, “as more tourists than ever are flooding into an area that is already seeing a slow but steady economic recovery, existing businesses will flourish, an influx of new businesses will surely open, and the housing market will get a much needed boost.”