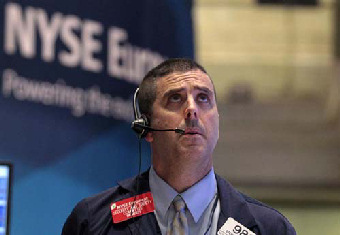 sentiment over the U.S. economy, which could be damaged from contagion in Europe.

Worries over the Greek debt crisis and economic turmoil other places in the Euro-zone trouble U.S. financial markets, which could spread into the housing market. Mortgage rates hit their all-time lows on the 30-year fixed rate and 15-year mortgages last week, according to Freddie Mac.

Treasuries usually lead the rise or fall of mortgage rates. The benchmark 10-year Treasury dipped below 1.70% Friday to hit a new all-time low before recovering. Rates were slightly higher Monday. The round trip helped investors eliminate an early bout of selling as some investors booked profits.

Growing doubts about the U.S. economy and jitters in other financial markets could send the bonds to new lows before economic issues are resolved in Europe, and send mortgage rates even lower. Analysts say it’s difficult to judge whether the effect will be positive for the nation’s housing market.

Treasury bonds are issued by the U.S. government to pay for projects. The bonds are insured by “the full faith and credit” of the government. Many are held by elderly citizens as long term investments to pay for expenses since they are considered such a secure form of investing.

Interest earned on Treasuries is exempt from state and local taxes, but is still owed on federal taxes.

The interest rate paid to investors or yield has fallen for ten straight weeks, matching the longest period since October 1998. The stretch is a sign that the market is overbought and may be due for a change, including a further drop if confidence is damaged by additional economic problems developing in Europe, which could spread to the U.S.

The 10-year bond fell to 1.689% before recovering at the peak of the rally, and did end at a near record low of 1.702% before closing slightly higher on Friday.