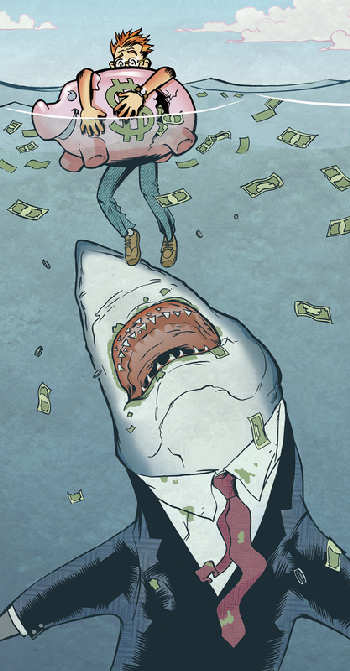 The nation’s largest five banks agreed to pay a $25 billion settlement as part of their agreement to settle allegations of illegal forgeries and other frauds in the robo-signing scandal. However, only $2.5 billion is dedicated to victims of foreclosure who suffered through the loss of their homes without banks providing proof of legal ownership to their property in many instances.

The details of the rip off were first reported on the investigative website ProPublica, which analyzed the money being targeted by the 49 states that approved the settlement. States diverted $974 million from the landmark settlement to pay down budget deficits, according to the analysis. The figure represents 40% of the funds dedicated to aid homeowners who lost their homes as a result of the “faulty foreclosures.”

ProPublica contacted state officials in every state that is receiving money as part of the agreement to resolve the banks problems. Many of the hardest hit states are even diverting the funds to use for other purposes instead of sending it to the victims of foreclosure as it was intended.

In California, which is facing a $19 billion budget deficit Governor Jerry Brown is proposing the state use the money as a windfall to pay down the state’s deficit. “What stands out is that even states slammed by the foreclosure crisis are diverting much or all of their money to the general fund,” the website reports.

“Arizona has also sent about half of its funds to general use. Four other states where a high rate of homeowners faced foreclosure during the crisis are spending little if any of their settlement funds on homeowner services: Georgia, South Carolina, Wisconsin, and Maine.”

Combined, only about $527 million of the money has been dedicated for homeowner programs. Since the financial crisis started in 2008 the majority of U.S. states have faced serious budgetary problems and looked for ways to solve them. Hard hit Nevada, Florida, Illinois and Nevada officials say they will use the majority of the program’s funds targeted to their states for homeowner aid programs.

Foreclosed homeowners, who suffered through illegal foreclosures at the hands of banks and bank servicing companies, were expecting checks in the amount of about $2,000 as part of the states agreement.

“Iowa Attorney General Tom Miller, who led the coalition of attorneys general who negotiated the deal, argued that only a very small portion of the settlement was being diverted and it will overwhelmingly benefit homeowners,” ProPublica reported.

The settlement doesn’t prohibit consumers who have wrongfully been foreclosed from suing their lender for damages, but bankers realize that most consumers don’t have the money to do so in court.