Massachusetts real estate professionals are rejoicing at evidence that the state’s real estate market is surging ahead. 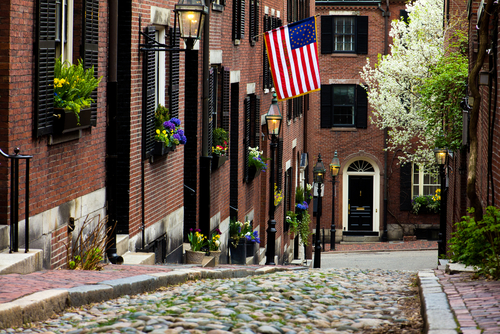 “All signs indicate that we are very likely skimming the bottom of the real estate bust, and things are just beginning to look up,” wrote Judy Reynolds, Sterling Massachusetts Realtor, in a November 2012 post on the Massachusetts Real Estate Trends blog. She noted that the state had less real estate market distance to close than many others. “Nationally, many other locations were much harder hit than Massachusetts.”

In January, the Patriot Ledger published an article (“Home prices up 12 percent in December”) indicating the median selling price of a single-family home in Massachusetts increased 12 percent from the previous year. The article reads in part, “the median price in December was $300,000, up from $267,250 in December 2011. Sales volume rose 8 percent, The Warren Group of Boston reported Thursday. For the full year, sales rose 18 percent statewide to the highest level since 2006. Sales have risen for 12 consecutive months on a year-over-year basis.

“‘As long as interest rates remain low, it’s a window of opportunity for buyers, so they’re out in force,’ said Sam Schneiderman, president of the Massachusetts Association of Buyer Agents.
The average rate on a 30-year fixed mortgage last week was 3.42 percent, mortgage buyer Freddie Mac reported Thursday. That’s just a shade above the all-time low of 3.31 percent in records dating to 1971.”

“I think we’re going to see a continuation of the low inventory for another year or two, even with rising prices,” Schneiderman told the Ledger. “Typically in a turnaround like this, it takes about three years for the sellers and the pricing to catch back up.”

In late March, WBZ-TV Boston reported, “spring is the busiest season in the real estate market, and this year is shaping up to be red hot. Homes are going under agreement at lightning speed which is good news for sellers like Kerri Ann Richard of Watertown. She listed her condo recently and is more confident than ever that the refinished pine floors and the track lighting will seal a deal quickly.

“‘I thought the spring would bring a little more traffic in, but getting 2-3 showings a day consistently has been a surprise to me,’ said Richard.

“Mike DelRose of Re/Max Leading Edge in Watertown says the market is ‘almost back to the days of prior to the peak of the market.’”

All the rising demand and shrinking inventory has sparked bidding wars in Boston, Cambridge, Somerville, Newton, and Brookline, according to a March 26 2013 article (“Scarcity of homes for sale around Boston sparks bidding wars) published in the Boston Globe. The article reads, “real estate specialists attributed the surge in would-be buyers to historically low mortgage rates and rising consumer confidence as the Massachusetts economy slowly blossoms. The house-hunting frenzy is a good sign, they said, but until more people decide it’s finally time to sell, no one expects the market to really take off.

“Houses that not long ago would have remained on the market for many months are now moving in days. But because not enough of them were up for grabs in February, the number of sales fell by 5 percent — to 2,246 statewide — marking the first drop in more than a year, said the Warren Group, a Boston firm that tracks real estate activity. At the same time, the median price rose by 12 percent, to $275,000, compared with February 2012.”

All this frenzied purchasing will likely lead to prospective buyers seeking property in less commonly sought-after locations, such as lower-cost cities and towns, which will, say housing economists, benefit the state’s housing market in general.

Meanwhile, construction has a ways to go to catch up with pre-housing bubble burst numbers in Massachusetts. There were 850,000 homes built in the state in 2000, an all-time high of nearly 1.4 million built in 2005, and roughly 390,000 built in 2012. Construction industry experts blame new energy code requirements and associated costs in part for the slow-down.

Still, there are ripples of activity in the construction industry. In March Boston Business Journal article (“Bay State construction employment up in January”) reports that “Massachusetts added 1,800 construction jobs in January, up 2 percent compared to the same month a year ago, according to an analysis of federal employment data by the Associated General Contractors of America.

“Haverhill, North Andover and Amesbury saw the biggest rise in construction employment with the addition of 600 jobs in January, or 18 percent more than one year ago. Boston, Cambridge and Quincy added 9 percent more jobs in January to 50,800, up from 46,400.”

Bloomberg published an article (“Boston Booms as Workers Say No to Suburbs: Real Estate”) in March that reads in part, “Boston’s real estate market, often overshadowed by the skyscrapers of New York and government-fueled growth in Washington, is seeing a boom in construction as developers financed with cheap debt seek to profit from a growing workforce of educated young adults and strength in the technology and life-sciences industries. The office-vacancy rate is among the lowest of major U.S. markets and tenants are occupying new space at almost triple the national average.

“Construction spending in Boston increased an estimated 37 percent in the year ended June 30 to $3.83 billion, the most since 2008, according to the mayor’s office. The market is hot enough that some developers are considering building offices without having landed anchor tenants.”