The 2014 Iowa housing market remains one of the few real estate markets which safely stabilized over the past thirty months or so. Of course, this housing market still has yet to experience the peaks from its days inside the housing bubble (which we can certainly argue is a good thing). The figures derive from pricing for both single-family units and condos. As mentioned before, perhaps that’s good news when all is said and done. The key to any market bubble is that the economics aren’t sustainable. Since 2011 onward, the Iowa real estate market fared relatively smoothly in terms of the average listing prices. Here are some of the most important aspects of the 2014 Iowa housing market that any real estate analysis should consider: 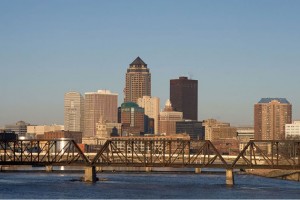 At the moment, experts cannot fully classify the 2014 Iowa housing market as either a buyers’ market or a sellers’ market. The situation remains fairly balanced in terms of asking and selling price ratios. For instance, detached family homes currently sell for $162,000 on average. This figure sits only 20 percent below most sellers’ listing prices. The condo and attached single family home (or townhouse) market faces a similar situation. These types of properties sell around 19 percent on average under the $132,000 average listed price.

As previously stated, the market fluctuations remained relatively mild in their degree and influence. A quick glance at both ends of the spectrum reveals that prices of housing units have neither increased nor decreased over the course of the past three months. The market recorded its largest listing price increase during this aforementioned time period in Ames (at 4.72 percent). West Des Moines followed just behind Ames (at 3.95 percent) and Des Moines (at 2.8 percent). Bettendorf experienced the largest list price drop (at 12.38 per cent), followed by Grimes (6.15 per cent), and Cedar Falls (5.02 per cent). IA Real Estate provided all of the data cited above. Urbandale city holds the most expensive homes for sale ($429,426). Urbandale is followed closely by Coralville ($381,313) and Clive ($381,171). However, all of these cities experienced slight drops in prices over the past three months. The market experienced the exact same drop in prices at the other end in the cities with the most affordable housing units: Newton sits at $125,133 and Waterloo at $127,714. The state capital of Des Moines provides a notable exception as the least expensive end of the market. Over the course of the past three months, the asking price of homes for sale increased by 2.8 percent.

The 2014 Iowa housing market is probably best suited for families than for singles. For instance, 42 percent of Altoona households include children. Compated to the national index, the crime ratio in this area stands at an impressive .76 points. Crime sits at even lower rates in Johnston (.43) and Waukee (.22). 41 percent and 40 percent (respectively) of all homes in these areas also have at least one child. If you’re single and considering moving to Iowa in the near future, you should consider the Ames, Iowa City, or Coralville metropolitan areas. 79, 77 (or 76 percent) of the population in these areas are unmarried.

As 2014 draws to an end, most market analysts expect the 2014 Iowa housing market to follow national trends. The fourth quarter of the year should slow down due to the colder weather and winter holidays. However, these trends remain consistent and typical with a similar slow period for home sales throughout the rest of the country. However, numerous realtors noted that potential buyers looking for a home in the year’s final three months are usually determined in their resolve to purchase. We remain interested in seeing if the market will live up to these relatively optimistic predictions since home prices in Iowa began to increase back in September. The number of successfully sold homes also steadily increased compared to the same time in 2013.

So far, increases have been mild on both counts. It’s safe to say that the 2013 Iowa housing market painted a very similar picture to the one we see now in 2014. Yet, one must consider the fact that home sales in September increased this year by .6 percent. Median sale prices also increased by 1.6 percent. This increase lead to sales prices of $134,000 in 2014. The average sales price of a single-family home also grew by 3.9 percent since the same time last year. That means an increase of $153,058. Homes now sell faster than last year. In September 2014, the Iowa Association of Realtors says a home spent 80 days on the market. This rate beat out last year’s record by 1 day.

While the state-wide inventory of available homes dropped compared to September 2013, the decrease only represents a nearly insignificant .1 percent. On the upside, the months’ supply of inventory increased. This increase also represents a very small margin of .4 percent. IAR representatives believe that the number of homes on the market has gradually increased due to buyer attitudes and encouraged sales. Iowa is improving slowly but surely. The next few years may represent the best time to invest in this emerging market.