Like most markets throughout the U.S., the Montana housing market experienced positive growth in 2013. The uptick began as a trickle. But, the market’s steady pace encouraged buyers, sellers, and market analysts alike with a sense of renewed hope. By mid 2013, the number of single family housing units for sale increased by 14.8 percent on the year according to the Montana Association of Realtors. Up to that point, Montana’s housing market sold 4,508 single-family homes through nine major markets in the state. We may compare that figure to the much lower 3,927 homes sold in 2012. At the time, the same organization also reported a sustained increase in average sales prices in all the analyzed areas. Official data for the 2014 Montana housing market shows that all of the positive expectations build up by 2013 were not just hype. 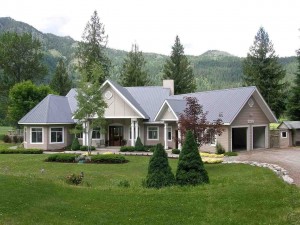 The increase in both housing values and median sale prices continued throughout the first two quarters of the 2014 Montana housing market. According to the president of the Montana Association of Realtors, the market will likely continue its improvement as would-be buyers increasingly trust the recovery. In a mid 2013 statement, President Pam Wood explained that potential buyers witnessed the market hit rock bottom and are now paying close attention to its renewed momentum.

Montana experienced a population change of nearly 10 percent over the past fourteen years. This growth is substantial. However, many experts feel the change is not significant enough to seriously impact the situation of the housing inventory in the state. According to BestPlaces.net, as of July 2014, the median value of a single-family home in Montana stood at $198,400 with a year-to-year appreciation rate of 4.20 percent. Our analysis of the housing market also considers the cost of living. Cost of living in Montana is significantly higher compared to the countrywide average of 6.90 percent. Although it may be more expensive to live in Montana than in other places around the U.S., we should note that the state’s unemployment rate (6.3 percent) sits much lower than the national average (4.5 percent).

Montana is better off than most of the U.S. where mortgage delinquency and foreclosures are concerned. The initial stages of foreclosing a property stand at only 2 percent in the 2014 Montana housing market. Those figures sit far lower than the national average of 6.9 percent. The average Montana home put up for sale on Zillow spends 87 days on the market. Also, the market witnessed a 5.7 point uptick in terms of overall health. Several metro areas in the state hold a median housing value that far exceeds the state’s average value. The median housing value for Whitefish stands at $311,500. Bozeman’s housing value is $280,100. Laurel ($169,800) and Great Falls ($147,800), Montana sit at the opposite end of the spectrum. The median listing price per square foot in Montana is $155. This figure is based on data from July 31, 2014. Some 27.8 percent of all homes on the market sell at post-price cut values.

As far as future estimates, many market analysts continue to feel positive about the Western Montana real estate market. The area may have experienced hard hits during the recession. However, the housing markets in Bitterroot Valley and the rest of the region are finally emerging from the post-recession slump. Though high priced homes still spend a lot of time on the market, more affordably priced housing in the mid to low segment of the market is picking up speed. As a member of the local board of realtors noted, Montana “is one of the last to go off the grid when the economy goes down with respect to real estate, and it’s also one of the last ones to come back on” (William McCluskey, Bitterroot Valley Board of Realtors). The area experienced a comparatively large number of foreclosures. The $100,000 to $200,000 market segment finally began moving again.

The Billings metropolitan area serves as an example of another area with a lot of potential for growth in housing market developments. In 2010, Businessweek forecasted that the region, which fared relatively well throughout the recession, would harbor the needed economic climate for development. The rate of unemployment in Billings remained consistently lower than national averages during the economic crisis. Billings stood at 5.7 percent in June 2010 according to data provided by the Bureau of Labor Statistics. Furthermore, housing prices in the region only fell by 3.1 percent towards the end of 2008. The estimate from Fiserv and Moody published on economy.com predicts a 15.7 percent increase from 2010 to 2014. In 2010, the median price of housing units in the area stood at $111,644. The median family income was $61,900.

Overall, the remainder of 2014 is not likely to bring too much dramatic change in the 2014 Montana housing market. Like so many other states, Montana appears to be growing slowly but surely. As of the publishing of this article, the number of closed transactions matched the levels recorded at the end of the second quarter of 2013. Experts predict that if mortgage interest rates improve, this year’s housing market sales levels might match the values posted in 2013. The level of the housing inventory also typically serves as a deciding factor. Since this year only brought meager improvements, many experts don’t foresee a likely change in the remaining four years of the 2014 Montana housing market.