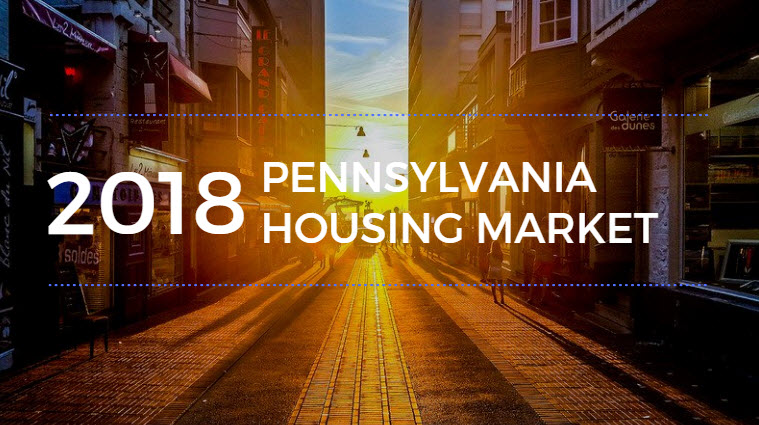 Pennsylvania, known as the Quaker State, is located in the northeast and mid-Atlantic regions of the U.S.

You might know it for being home to the Liberty Bell, but the state has so much more to offer. In this guide, we’ll take a look at the Pennsylvania housing market.

Pennsylvania is well established in comparison to some “newer” states and was actually one of the original 13 U.S. colonies.

The state borders Lake Erie and the Delaware Estuary and has over 100 miles of shoreline.

Pennsylvania is an industry-rich state that creates a GSP of $719.8 billion annually – ranking 6th in the nation. Pennsylvania is home to 50 Fortune 500 companies. Some examples of primary industries that constitute the economy of Pennsylvania are Agriculture, Gambling, Film, and Banking. There are also some significant historical examples of steel manufacturers, specifically in Pittsburgh such as the now-defunct Bethlehem Steel and U.S. Steel.

Home values are key in determining the attractiveness of a state’s housing market, as it’s a key indicator of whether or not consumers view the state as desirable.

Home values in Pennsylvania have increased on the quarter-to-quarter and year-to-year basis, and even over the last 18 years, have increased by over 78%. That means a home purchased in 2000 would have nearly doubled in value by now.

The majority of the state’s residents are homeowners versus renters, which again is a sign of a healthy housing market. In the Pennsylvania housing market, 66 percent of residents own their home.

2018 Is the Year of Suburban Migration

Because of rising prices due to limited housing inventory, it’s likely that 2018 will reveal a migration to the suburbs in many parts of Pennsylvania.

Cities like Philadelphia are sort of “having a moment”, but the trend will soon shift, especially for millennials.

That is according to Zillow’s senior economist Skyler Olsen, who also said, “There is just less land available to build on. The land available is farther out, where you tend to run up less against NIMBYism [a term referencing the phrase ‘Not in My Back Yard’], and challenges to development.”

2018 will likely be the year that the “trend” of young people living in metropolitan areas wears off, and they establish more reasonable suburban residences.

This will likely increase neighborhood value in the suburbs, leaving it the best time to buy.

Best Places to Live in Pennsylvania

Pennsylvania offers a wide variety of places to live from modern cities to smaller quaint towns, as well as plenty of industrial towns. However, some towns rank higher in terms of desirability.

An example of that is Chesterbrook, PA. Chesterbrook has been rated the best place to live in Pennsylvania.

Chesterbrook received a grading of “A” for its public-school system, housing market, family-friendliness, jobs, outdoor activities, diversity, health and fitness, and computability.

The median home value in Chesterbrook is higher than the national average, but over 80% of residents own their homes versus renting. This is a good indicator of a reasonable balance between wages and costs in an economy.

The median household income in Chesterbrook is over $100,000 annually – nearly double the national average.

Home values in Houserville are lower than the rest of the state, but the city has received an “A” grade in computability. Typically, the most commutable towns have much higher costs. Additionally, around 82% of Houserville residents own their home.

The Pennsylvania Housing Market is At a Pivotal Moment

As costs in urban areas rise, and desirability of suburban cities increases, it will be interesting to see exactly how the 2018 Pennsylvania housing market plays out.

This is for certain, however, the market is at a pivotal moment in time, and it’s likely that market value will only increase from here. Strong job growth and stable supply and demand ratios indicate that the Pennsylvania housing market is going to continue in its current trends.