Struggling to keep their housing rescue efforts alive, a senior Obama administration official admitted the administration has more work to do to help the growing number of homeowners at risk of foreclosure before a gathering of state housing finance agency officials in Washington. 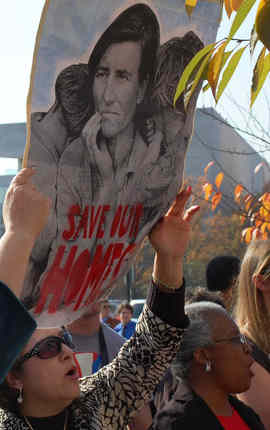 Michael Barr, the Treasury’s assistant secretary of financial institutions told a gathering of state housing finance agencies that the Obama administration’s housing policies are “designed to stabilize the U.S. housing market and help keep millions of homeowners in their homes.”

As the Obama administration’s efforts to stabilize the housing market fall short to curtail fallout of the financial crisis, Barr said the administration needs to do much more to aid markets. “We have more work to do to help American homeowners and the U.S. housing market,” Barr said. “Families are struggling and communities are hurting. Foreclosures and delinquency rates remain high.”

More than 5 million homeowners are behind on their mortgage payments. An estimated 5 million have already been foreclosed in the worst foreclosure crisis in U.S. history. And another 15 million are at risk of losing their homes.

State housing finance agencies are at the center of the administration’s plan to rescue the housing market from further deterioration with the president’s “Hardest Hit Fund,” which provides $1.5-billion in aid to homeowners at risk of foreclosure. Under the plan, the state’s most severely impacted by the crisis will receive aid for homeowners under water on their mortgages, loan holders who are unemployed and those who have second mortgages or lines of credit on their homes.

California, Florida, Michigan, Nevada and Arizona are targeted by the program. White House officials say the program has been designed to save millions of homeowners from losing their homes. But critics say the plan is little more than political amusement since the Obama administration’s housing rescue efforts so far have done little to produce any real impact on healing housing markets.

“The legacy of price declines together with the effects of high unemployment means many working and middle class families in these especially hard hit areas are facing serious challenges,” Barr told the housing group. “Home prices across the country are beginning to stabilize,” Barr said. But there is little actual evidence that housing prices across the country have begun to stabilize except in slightly more than two handfuls of markets, where prices have fallen the worst since the foreclosure epidemic began, impacting home values more than any other single factor.

Another plan also unveiled by the Obama administration is designed to place more homes on the market for sale before they are foreclosed, but critics say it has little chance of working. The program would give mortgage holders $1,500 to sign over their home to lenders after an offer on their property is completed as a short sale, similar to what renters are provided under other federal loan programs. Bankers would receive $1,000 for administering the program. The program starts on April 5th.