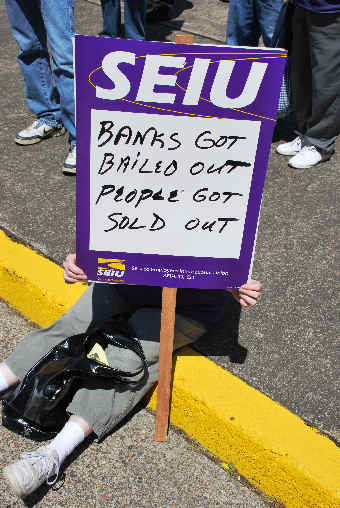 in an effort to aid the U.S. economy, and slow the rate of foreclosures. That’s the finding from a new Housing Predictor survey, which found that a large majority feel that the same banks that got the U.S. into the housing mess should pay the price to get us out of the mess.

The new opinion poll shows that Americans feel bankers should pay that price by a large margin, with 60% saying mortgages of homeowners at risk of foreclosure should be cut. The balance of 40% said they should not be slashed, perhaps fearing financial repercussions of the move.

The Federal Reserve is continuing to purchase mortgage backed securities on home loans that have defaulted and gone to foreclosure, which is amounting to trillions of dollars. Financial analysts also see it as obvious that tax payers will pay for those mortgages through higher taxes, despite political party differences.

Should banks be required to cut the mortgage principal of homeowners that are in danger of foreclosure to aid the U.S. economy?