Exiled Countrywide CEO Angelo Mozilo walked away from his giant company with a golden parachute of nearly $300 million, close to a $24 million pension and $21 million in deferred compensation. Everyone who has been affected by the mortgage crisis, including millions of foreclosure victims is wondering what the fate of Mozilo will be in the fallout of the crisis.

Ex-Countrywide President David Sambol enjoyed a severance package worth $28 million, including country club dues. He was also given use of the company’s private jet to take his family on a vacation to Africa in the midst of the housing collapse. 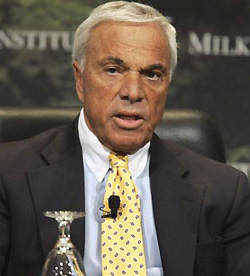 Angelo Mozilo’s deeply tanned image and broad smile were plastered all over internal marketing material. Countrywide was his baby, and he let you know it. His image was that of a fast-talking, powerful wheeler-dealer, and this permeated throughout the entire sales force.

Countrywide was definitely a sales-driven company. A frequent motto was “Ops reports to Sales,” meaning that the guardians against risk and bad loans, the “Operations Division underwriters,” were junior to the sales force. This unusual structure led to sales executives coming up with unheard of loan products and creative ways to get them funded.

Mortgage brokers may take a lot of the blame for the financial crisis, but loan agents at Countrywide and a lot of other mortgage lenders offered the same sort of products and same inducements to borrowers that helped to cause the housing crash.

Mozilo, 70, has had his problems with federal regulators, charged by the Securities and Exchange Commission with two other ex-company executives with fraud, awaiting trial on the charges, pending an agreement that could be worked out with the government.

For More Read “Secrets of a Countrywide Insider”

The SEC suit also charges Mozilo with insider trading as a result of stock profits he collected in the days before the financial crisis exploded on Wall Street. As a major player in the subprime mortgage market, Mozilo made his company and himself a target for federal investigators as the shining public face of Countrywide.

Exiled from Countrywide when the company made a quick deal to sell its stock to Bank of America when the financial crisis exploded on Wall Street, Mozilo was charged fourteen months ago by the SEC. Everyone is wondering whether the former Countrywide “King” will ever face trial in federal court. If convicted, Mozilo could be sentenced to prison or be forced to pay huge fines to the government. 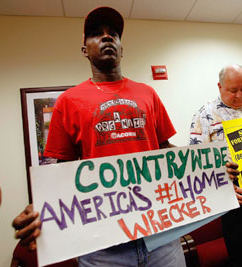 Imagine going to a bank to ask for a mortgage with an undocumented salary and an estimated market value from Zillow instead of an appraisal. Today, you would be laughed out of the office, but this was common as recently as three years ago. Countrywide’s Fast & Easy “Liar Loans” were a favorite among loan officers. They were for borrowers with FICO scores 720 and above, and they required very little proof of anything. Often, not even an appraisal would be required.

Countrywide’s automated underwriting system, called CLUES, listed very simple requirements for loan approval for this program. No pay stubs or bank statements were needed, and an electronic appraisal figure from the lender’s own proprietary valuation system—similar to Zillow—would be enough in many cases. When appraisals were required, they would often be exterior only quickies.

Raising the Score to Repeat a Crash

We also had access to in-house rapid credit rescoring services, allowing us to bring borrower credit scores up in as little as 48 to 72 hours. We knew how to advise a borrower to strategically pay off or dispute certain items to gain the points needed to get an approval quickly.

These risky loans were acceptable because Countrywide simply sold them off. It had no “skin in the game,” so it couldn’t care less what happened to the loan later on. As reported in National Mortgage News, a bill that required lenders to retain 5% of all mortgages made was just weakened due to pressure by the Mortgage Bankers’ Association.

The banks are demonstrating, once again, that profit over prudence reigns. This behavior will undoubtedly lead to another bubble and real estate crash. Only this next time, there will be very few mortgage brokers left to use as scapegoats.

For nearly four years Willie Pena worked as a home loan consultant for Countrywide Home Loans in Seattle, Washington from late 2003 until mid-2007 where he sold loans to home buyers in the harrowing days of the real estate boom. Like many consultants Countrywide hired, Pena had no experience in the field until being hired by the now defunct lender, which takes more blame for the nations economic mess than perhaps any other single entity.