Foreclosure notices declined in January, but still remain at record high levels for the year, according to the latest Realty Trac monthly report. Some 315,716 properties were tagged with notices during the month nationwide. 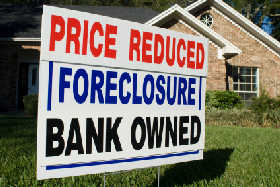 The decline in notices marked a 10% drop from December numbers, but shows that one in every 409 housing units is in jeopardy of foreclosure as government measures to stem the tide of defaults do little to halt the crisis.

The economic downturn in housing shows few promising signs for homeowners losing their homes, but sales of discounted foreclosed homes have increased in California, Arizona, Michigan, Nevada and Florida as buyers find bargains on residential properties. Las Vegas had the highest metropolitan foreclosure rate in the nation and one of the highest home sale rates with a 21% drop in foreclosures from year ago levels.

“January foreclosure numbers are exhibiting a pattern very similar to a year ago,” said James Saccacio, chief executive officer of Realty Trac. “A double digit percentage jump in December foreclosure activity followed by a 10% drop in January. If history repeats itself we will see a surge in the numbers over the next few months as lenders foreclose on delinquent loans where neither existing loan modification programs or the new short sale in deed-in-lieu of foreclosure alternative works.”

Little evidence exists to show government programs are working to limit the epidemic of foreclosures. Only 66,000 mortgages have been modified nationally, according to the Treasury Department. Another massive record breaking round of foreclosures is forecast for 2010.

Nevada retains the highest foreclosure rate in the U.S. for thirty-seven months with one in every housing units receiving a foreclosure notice during the month, which represents a four-fold lead above the national average.

A slight four percent monthly increase in activity boosted Arizona to the second highest foreclosure rate among states in January as the Phoenix metropolitan area led the top 10 metropolitan areas in the country with homes at risk of foreclosure. But notices of pending foreclosures dropped by double-digits in California and Florida. However, California’s foreclosure rate ranked third followed by Florida in January. Michigan, Idaho, Illinois, Oregon and Georgia were also among the worst states impacted by the crisis in January.

Six states, including California, Florida and Arizona account for nearly 60% of all foreclosure activity with Illinois, Michigan and Texas rounding out the states with the highest number of homes at risk.