By Mike Colpitts
First time home buyers made up more than one out of three home purchases in July to compose the highest number of buyers in months, according to the 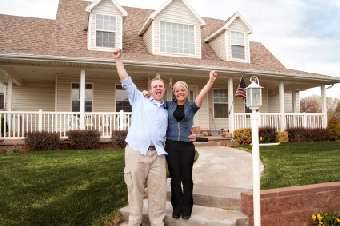 National Association of Realtors. The slim hike in first time buyers, however, is still below any sort of normal pace on an historic basis.

Firs time buyers accounted for 34% of home purchases, up from 32% in June as first timers took advantage of record low mortgage rates. The fixed 30-year home mortgage bottomed out at an average of 3.49% in late July, the lowest on record, according to the Freddie Mac survey.

First timers reached 50% of home purchases in 2010 when a federal tax credit was offered to home buyers. However, when the credit which was intended to push the housing market into a recovery, was eliminated home prices fell. Since then many first timers have become underwater on their homes with much higher mortgage balances than many other homeowners.

“This segment is critical to a housing recovery because they help existing homeowners sell and make a trade,” said former NAR president Ron Phipps, a Rhode Island broker.

However, a low inventory of discount priced foreclosures, short sales and lower priced homes is making it difficult for many buyers to find homes. The tight inventory of property listed on the market is making it tough for buyers to take advantage of low mortgage rates. Cash purchases on lower priced homes by investors are also troubling the market in many U.S. cities.

Normal conditions or a balanced market would provide 40% of purchases from first time buyers picking out single family homes, townhouses and condominiums. The sluggish first time sector has been slowed by weak consumer confidence, declining home values in many areas of the nation and doubts about the future health of the overall economy.

The housing market is also constrained by tight lending standards and a smaller supply of homes listed at cheaper prices. High unemployment in the 20-something age range and under-employment also contribute to the limited number of buyers.

An expected supply of foreclosed homes listed at lower prices could aid the market in its recovery in many areas of the country, and drive up the number of additional first time buyers making purchases.