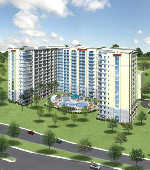 Construction workers are re-tiling their bathrooms, real estate agents are taking jobs as waiters and waitresses, and mortgage brokers are sitting around watching TV. The collapse of the housing market has been brutal on just about everyone, it seems, with any connection to the industry.

Well, almost everyone. Attorneys are busier than ever.

As condo prices collapse in many markets, buyers who long ago signed pre-construction purchase contracts are watching nervously as their buildings near completion. Their gleaming new units, in some cases, are worth about half the contract price, meaning that those who still want to close can obtain financing for only a small percentage of the sale price.

That usually leaves buyers with a lose-lose proposition: Either walk away from deposits that often reach six figures, or they can dig even deeper in their pockets to make up the difference between the condo’s inflated contract price and its current value.

Attorneys, not surprisingly, are offering a third option. They are filing a flood of lawsuits in some of the hardest-hit markets, seeking to get deposits refunded to buyers who no longer want  or no longer can afford  to close on their units.

But developers are lawyering up, as well, choosing to play hardball with buyers they insist are greedy profiteers, not innocent victims of larger economic forces. Builders point out that in the go-go years, when pre-construction condos were appreciating by 20 percent a year and more, buyers never offered to pay more than stipulated in their contracts. And now that the market is falling, they say, those same buyers have to share the losses just as they would have shared the gains.

Though defending against lawsuits is an expensive proposition, builders often have nothing to lose. At the Towers of Channelside, a luxury project in Tampa, Florida, developers said up to 66% of their buyers were canceling contracts and walking away from deposits as the local condo market imploded.

So when nine buyers filed suit to get out of their contracts and get their money back, the developer was in no mood  or position  to deal. On January 25, with the lawsuits still pending, the Towers of Channelside, LLC filed for bankruptcy protection, citing debts of up to $100 million. Lawyers say the nine litigants stand little to no chance of recovering their deposits, much less the legal fees they may have piled on suing the developer.

The developers’ legal maneuvering isn’t reserved just for buyers. The Related Group, one of the biggest condo developers in the country, has filed more than a dozen suits against Realtors, whose clients backed out of their purchase contracts at the Beach Club project in Hallandale Beach, Florida. Rather than wait until closing, Related often paid commissions when contracts were signed, and it now wants almost $500,000 of that money back.

Likewise, Tibor Hollo, developer of Miami’s Opera Tower, filed a $25 million defamation suit against Realtor Lucas Lechuga after Lechuga predicted on his real estate blog that Opera Tower would face a rash of buyer defaults. After the suit, Lechuga was fired from his firm, Esslinger-Wooten-Maxwell. He has since found another firm and continues to blog on Miami’s turbulent market.

As for Opera Tower, since it began closings on Dec. 28, it has managed to complete sales on fewer than 8 percent of its units, according to public records. At least nine buyers have filed suit to rescind their contracts  and Florida East Coast Realty, Hollo’s development company, is fighting them in court.