Nearly 2.9 million U.S. residential properties received foreclosure filings in 2010 setting a new record in the nation’s foreclosure crisis even as homeowner foreclosures eased as a result of the robo-signing scandal, according to RealtyTrac. 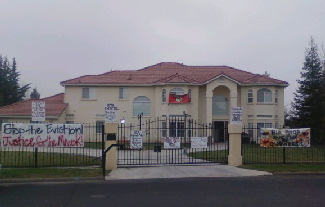 All combined default notices, scheduled auctions and formal bank repossession notices totaled 3,825,637 filings for the year. The total number of homes filed against represented a 2% increase over 2009, and also showed that one in every 45 housing units received at least one foreclosure filing during the year as growing joblessness troubles the U.S. economy.

However, December default notices declined 4% from the prior month and dropped 35% from a year ago as five major lenders temporarily halted foreclosures as a result of bank employees admitting to wrong doings in the foreclosure process. Attorney generals in all 50 states are investigating the matter and reportedly are negotiating with banks to work out a deal to resolve the problems involving at least tens of thousands of homes.

Mortgage servicing companies and lenders imposed the delays in October, but mortgage servicers have resumed stalled foreclosures.“Total properties receiving foreclosure filings would have easily exceeded 3 million in 2010 had it not been for the fourth quarter drop in foreclosure activity triggered primarily by the continuing controversy surrounding foreclosure documentation and procedures,” said James J. Saccacio, chief executive officer of RealtyTrac.

“Even so 2010 foreclosure activity still hit a record high for our report, and many of the foreclosure proceedings that were stopped in late 2010, which we estimate may be as high as a quarter million will likely be re-started and add to the numbers in early2011.”

Just three states, Nevada, Florida and Arizona combine to suffer the highest foreclosure rates, and all three rank near the top in terms of unemployment or underemployment rates in the country.

More than 9% of Nevada housing units received at least one foreclosure filing in 2010.Arizona accounted for the nation’s second highest rate with 5.7% of all housing being served with a foreclosure notice of some sort during the year, and Florida ranked third highest at 5.5%.

All together just five states, including Florida and Arizona represented 51% of all foreclosure activity in the U.S. With California, Illinois and Michigan the five accounted for nearly 1.5 million properties receiving at least one foreclosure filing during the year.