Freddie Mac and Fannie Mae are the U.S. two largest mortgage holders. Between them, 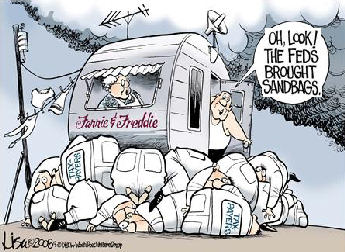 they own 75% of all the home loans issued in the nation.

Thanks to the bursting of the housing bubble and the resulting fallout, the American taxpayer – under the umbrella of the U.S. government, also owns 80% of Freddie Mac and Fannie Mae.

This is, to put it plainly, socialism. Socialism is commonly defined as an economic system characterized by public ownership and centralized regulation of all major industries and business venues, from energy generation to medical care. It differs from capitalism in that, under capitalism, ownership is held by only a few, who use their economic truncheon to extract wealth (in the shape of labor) from workers.

During the worst of the crash, beginning officially in 2008 but visible as early as 2007, both Freddie and Fannie were given bailouts, just like the banks. The total direct cost to rescue these supposedly FTC-regulated (but not state supervised, given their gargantuan size) lenders is estimated as north of $160 billion but south of $1 trillion. The hit as of June 2010 was $145 billion, or more than was spent to bail out American International Group (AIG), General Motors, or Citigroup Inc., all of which have begun paying the government back.

This $145 billion is less than half as much as the Congressional Budget Office (CBO) estimates may be needed through 2019 to prevent the entire U.S. mortgage industry from floundering on the spineless backs of Freddie and Fannie.

In fact, the two may need more than the CBO estimated — $389 billion if housing prices continue to tumble, as they have been with depressing regularity – a probability that ranks high. 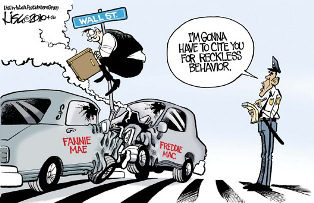 For those who haven’t been following the mortgage twins’ debacle, the bailout is reportedly the largest nationalization of an industry to take place in history. What does this socialism mean to the average American? That the government likely owns your home, and you will pay twice: once on your mortgage, and once again on austerity measures (read higher taxes) designed to recover the money spent on bailing out the rich and greedy so-and-so’s who put the two home lenders in the line of fire in the first place.

Of course, you can express your displeasure. But how? And to whom? Congressmen on both sides of the aisle contributed to this debacle, so you can’t vote the miscreants out – assuming you can identify them in the first place. And you could write a letter to your local newspaper, decrying the fact that the government has seized private assets (a bottom-line example of socialism), but the mass media seems singularly disinterested in the shenanigans of a handful of lawmakers who apparently never read the Constitution or the Bill of Rights.

So who are the real culprits behind this? Formally they are: Federal National Mortgage Association (or Fannie Mae), and the Federal Home Mortgage Corporation, aka Freddie Mac – two entities that have been operating since 1968 as government-sponsored enterprises.

They are privately owned and operated by shareholders, yet protected from financial ruin by the support of the government. Which protection includes a U.S. Treasury line of credit, relief from state and local income taxes, and no SEC (Securities and Exchange Commission) oversight.