In Las Vegas, gamblers are refraining from putting down payments on homes in neighborhoods to find some of the best real estate deals at auctions. In Los Angeles want-a-be homeowners are checking home listings online to check prices, and then turning out to bid on auctions in search of bargains. And in Maryland at Towson based auctions that were cancelled last week as a result of possible paperwork flaws on foreclosures, home auctions are being resumed.

An estimated 20% decline in foreclosed properties available for sale has only been a dent for the booming home foreclosure auction business as a result of moratoriums put in place by four major national bankers. Bank of America, JP Morgan Chase & Co., PNC Financial and Ally Financial implemented the temporary moratoriums in at least 23 states to review paperwork on foreclosures. 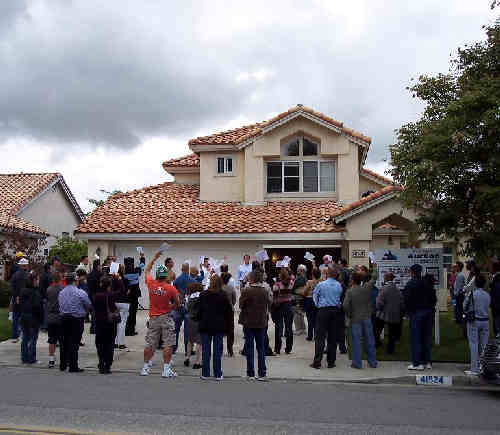 An auction near the Los Angeles International Airport over the weekend sold 118 properties and netted $15-million in sales. Another brought in more than $4-million in sales in Charlotte, North Carolina Saturday, where foreclosures have been at record highs after the banking crisis exploded the Charlotte economy. Charlotte was the nation’s second largest banking and financial industry employer before the financial crisis hit employing 27% of its work force.

Lay-offs in banking have hit the community but Charlotte officials, including the Chamber of Commerce remain resolute. “Charlotte’s taken a bad wrap nationally,” said Jeff Edge, the chamber’s senior vice president of economic development. “But we’ve actually been able to retain a lot more jobs than what it may look like.” Wachovia Bank was taken over by Wells Fargo Bank, which is keeping many workers in place in Charlotte.

Another $3.5-million in homes, condos and townhouses were auctioned off in Birmingham, Alabama over the weekend as 143 bank owned foreclosures sold at the Sheraton Birmingham Hotel. The event marked an eight day, eight city auction tour for Auction.com, which hopes to auction off more than 1,000 homes at locations in Alabama, Tennessee, North Carolina and Georgia.

Despite foreclosure moratoriums in place by the four lenders, the home auction business is anything but slow these days. Auction.com has auctioned off more than 1,800 foreclosures in the southeastern corridor of the country alone this year, and thousands of other properties in many other states.

In Las Vegas, the foreclosure capital for two years running a huge inventory of bank-owned REOs is driving prices lower, and buyers are picking up bargain priced deals at auctions, a catalyst of the real estate recovery. Many homes that are auctioned-off are first listed by real estate agents, but often times need too much work to entice a buyer. Turning the property over to an auction company can get the home sold and fixed up by a new buyer to improve the neighborhood.