Sales of existing homes fell in February, slightly less than 1% from the previous month, despite unseasonably warmer weather in most of 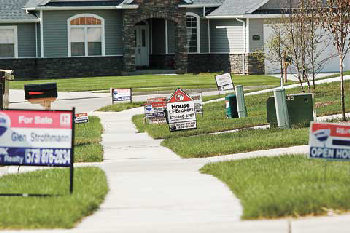 the U.S. but maintained a stronger pace of sales over a year ago, according to the National Association of Realtors. Home sales tabulated by the organization, include single family homes, condos, townhouses and co-ops.

The decline in transactions represented a slim 0.9% drop for the month on a seasonally adjusted annual rate of 4.59 million home sales from an upwardly revised 4.63 million units in January. The figures only count homes and other residential properties sold by association members, and do not account for private sales by homeowners, many banks and auction houses.

“The market is trending up unevenly, with record high consumer buying power and sustained job gains giving buyers the confidence they need to get into the market,” said NAR chief economist Lawrence Yun. “Although relatively unusual, there will be rising demand for both rental space and homeownership this year. The great suppression in household formation during the past four years was unsustainable, and a pent-up demand could burst forth from the improving economy.”

Yun’s enthusiasm for the housing market’s growth during the year may be tempered by high unemployment, which averages 8.3% and is still the longest and highest unemployment since the Great Depression, with many regions of the nation experiencing much higher joblessness.

However, near record low mortgage rates are pushing many buyers off the fence and into homes. The national average commitment rate for a 30-year fixed rate mortgage was a record low 3.89% in February, according to Freddie Mac.

“Supply and demand have become more balanced in more markets, but with tight supply in the lower price ranges, particularly in the West,” said NAR president Moe Veissi. “When markets are balanced, we normally see prices rise one to two percentage points above the rate of inflation, but foreclosures and short sales are holding back median prices.”

The U.S. median existing home price edged 0.3% higher for the month, according to NAR to $156,600. Distressed home sales, which include foreclosures and bank assisted short sales accounted for 34% or more than one in three sales during February, down from 35% in January and 39% from one year ago.

“The bottom line is investors and first-time buyers are competing for bargain priced properties in much of the country, with home prices showing signs of stabilizing in many areas,” Veissi said.