By Mike Colpitts
A year of appreciating home and condominium values has sent developers scrambling to find land to build new developments on in Miami. The booming shape of real 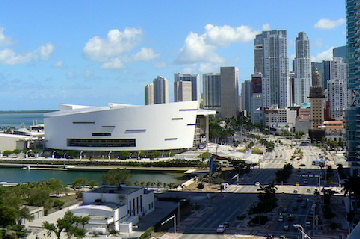 estate reality is flying high again in this picturesque waterfront city. The American Dream is alive and well in one of America’s great vacation spots.

There are 45 new condominium towers proposed to be built in the region, which includes swank Miami Beach and South Beach, where there’s no shortage of bikinis most of the year. The construction crane was said to be the state’s bird by real estate types during the bubble years, and it seems that it’s going back to work.

The housing crash was devastating for the region, but it’s all but healed with the influx of new money from international buyers, two out of three of whom are paying cash for property purchases. No mortgages are needed for this well to do set.

Cheap money in terms of mortgage rates and pent up demand is also driving a recovery in Florida’s largest metropolitan region. Home sales are climbing for the second year in a row as record low interest rates push more home buyers into action. However, a 10% high unemployment rate still troubles most of Miami and most of Florida, which depends heavily on its tourist business and real estate industries for mainstays of the state’s economy. The joblessness rate has been cut in half.

“Miami is a global hotspot attracting attention on many fronts, including tourism, global business and banking, and performing arts and entertainment in addition to real estate,” said Miami Realtors’ president Patricia Delinois.

Discount priced condo units are selling fast, and there’s a bursting inventory of 3,900 new units to choose from. A new condo development just finished weeks ago is already selling the rest of its units out and five more developments are under construction. Developers are betting that prices will go up quicker than the building can in this new economy.

The buyers are from all over the world, but mainly Central and South America. The cocaine cowboys produced a booming violent metropolis in Miami during the 1970s and the Mexican cartels are injecting plenty of cash into the Miami economy in today’s new era. “Some are buying just because they’re wealthy,” said Peter Zalewski of CondoVultures.com, an online data firm specializing in the condo market. “The Mexican drug wars have brought a lot of money into Miami.”

Despite a tight supply, pending home sales rose in Miami during May, according to the Miami Association of Realtors. “Increased demand for Miami properties will continue to drive price appreciation and strengthen our market,” said Martha Pomares, the association’s chairman of the board. Demand for homes and condos is 2% above what sales were a year ago. But pending sales of condominiums were nearly one percent (0.8%) below a year ago, down to 6,909 units sold during the year for the region.