A Florida attorney, who was one of the first in the nation to be a whistle blower in the banks robo-signing scandal by exposing her own 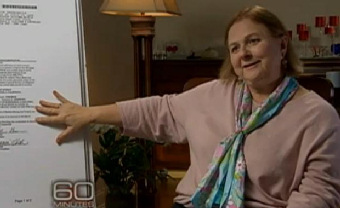 foreclosure to public ridicule, will be paid $18 million to settle claims over the 2009 botched foreclosure of her condominium unit.

West Palm Beach attorney Lynn Szymoniak will get the money from a $95 million fund South Carolina will receive from the nation’s largest five banks agreeing to a $25 billion settlement. Only about 1 million homeowners are expected to be helped by the settlement the lenders worked out with 49 state attorney generals.

Most are expected to receive checks for around $2,500 for their homes having been foreclosed without the proper paperwork signed by banking representatives. South Carolina U.S. Attorney William Nettles said Szymoniak will be one of the first to receive her check.

Szymoniak was featured in a CBS 60 Minutes story on the robo-signing mess in April of last year. “In my mind this is an absolute intentional fraud,” the attorney who is a scientific forgery expert told reporter Scott Pelley in the interview.

While trying to save her own condo from foreclosure, Szymoniak discovered when Wall Street was using algorithms and computers to engineer those disastrous mortgage-backed securities that ignited the U.S. financial crisis they lost the paperwork to prove they owned at least hundreds of thousands of mortgages.

“Exactly when you could make a whole lotta money through securitization and every other aspect of it could be done electronically, you know, key strokes,” said Szymoniak. “This was the only piece where somebody was supposed to actually go get documents, transfer the documents from one entity to the other. And it looks very much like they just eliminated that stuff all together.”

The attorney’s mortgage was bundled with thousands of others into one of those Wall Street securities traded from investor to investor, according to the 60 Minutes report. When the bank filed against Szymoniak representatives for the lender said they lost her documents at first, but then more than a year later said they found her documents proving they owned the mortgage.

Szymoniak was understandably suspicious. “What do you imagine? It fell behind the file cabinet? Where was all of this?” inquired the attorney. “We had it, we own it, we lost it.’ And then more recently, everyone is coming in saying, ‘Hey we found it. Isn’t that wonderful?'”

The bank didn’t realize that Szymoniak was exactly the wrong mortgage borrower to mishandle during the course of a foreclosure as an attorney and fraud investigator with a specialty in forged documents. Szymoniak has trained FBI agents and doesn’t have to work another day in her life.