The chief administrator of the U.S. agency overseeing the nation’s giant mortgage lenders stopped short of offering aid to underwater 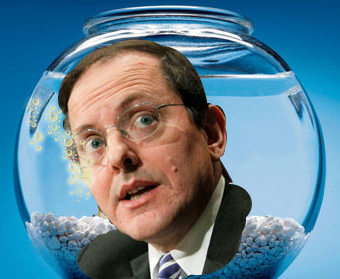 mortgage holders with principal reductions in a speech in Washington D.C., Tuesday morning, delaying any decision on the matter for the time being.

Acting Federal Housing Finance Agency director Edward DeMarco, who was appointed to the position by President Barack Obama and is essentially the nation’s housing czar told a crowd at the Brookings Institution that he would not be outlining a plan to slash mortgage principal on 11 million U.S. underwater mortgages, but outlined his agency’s steps to aid the housing market over the past six years.

“The Federal Reserve has estimated that from the end of 2005 through 2011, the decline in housing wealth to be $7.0 trillion,” DeMarco said during his speech. “Six years into this housing downturn, the losses persist. The debate continues about how we as a society are going to allocate the losses that remain.”

DeMarco has been under pressure from Congressional Democrats to offer some sort of additional program to aid underwater homeowners more aggressively. The housing crisis has resulted in more than 7.5 million foreclosures since it started, and cost tax payers in excess of $184 billion in bail-outs for Fannie Mae and Freddie Mac.

DeMarco said that despite 11 million homeowners being underwater on their mortgages, only as up to 1 million would be helped through a program to reduce mortgage principal.

“This is not about some huge difference-making program that will rescue the housing market,” DeMarco said. “It is a debate about which tools at the margin, better balance two goals: maximizing assistance to several hundred thousand homeowners while minimizing further cost to all other homeowners and taxpayers.”

The housing czar said he was unsure how much mortgage holders who are able to keep up on payments, despite being underwater would be helped in terms of their homes increasing in value from such a program, and expressed concerns over the majority of homeowners who are upside down on their mortgages.

“The anticipated benefit of principal forgiveness is that, by reducing foreclosures relative to other modification types, Enterprise losses (for Fannie Mae and Freddie Mac) would be lowered and house prices would stabilize faster, thereby producing broader benefits to all market participants.

“The far larger group of underwater borrowers who today have remained faithful to paying their mortgage obligations are the much greater contingent risk to housing markets and to taxpayers.

“Encouraging their continued success could have a greater impact on the ultimate recovery of housing markets and cost to the taxpayers than the debate over which modification approach offered to troubled borrowers is preferable. A key risk in principal forgiveness targeted at delinquent borrowers is the incentive created for some portion of these current borrowers to cease paying in search of a principal forgiveness modification.”