The smallest town in the U.S. ranked by population was auctioned-off for $900,000 to a Vietnamese man, whose dream came true to buy a  piece of America. Buford, Wyoming originated in the 1860s 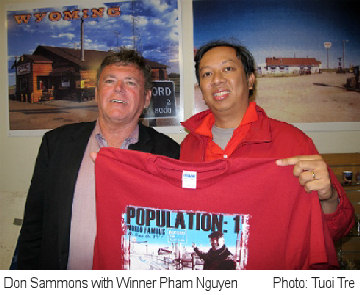 and was a busting community of 2,000 residents before the transcontinental railroad was re-routed.

Don Sammons has been the town’s sole resident ever since his wife died six years ago. His kids had moved away from the Interstate 80 outpost years earlier. Sammons purchased the town, which is mostly composed of a gas station that caters to tourists and a home in 1992.

Buford, Wyoming is the second oldest town in the state and was made famous back in 1869 when U.S. President Ulysses S. Grant visited the town, and outlaw Butch Cassidy robbed a store in the community. Cassidy was later convicted and sentenced to prison for the robbery.

The tiny town’s population dwindled when a military fort was moved to Laramie and the county seat was changed from Buford to Cheyenne. Now the community is isolated and doesn’t have any neighbors for miles, but Buford does have some of the greatest views in Wyoming of the spectacular Rocky Mountains.

The small town received bidders from 46 nations for the auction, which includes 10 acres, the gas station with an accompanying convenience store and a modular home.

The winning bidder, Pham Dinh Nguyen, flew to Wyoming just for the auction from Vietnam, where he is General Director of International Distribution Services Co (IDS) headquartered in Ho Chi Minh City.

“Auctions always bring a lot of attention, but even we were amazed at the amount of attention to Buford worldwide,” said Amy Bates, chief marketing officer for Williams & Williams, the company that held the auction. “It’s the Wild West in the U.S. It’s owning your town and getting away from it all.”

“Owning a piece of property in the U.S. has been my dream,” the winning bidder Nguyen said. Nguyen has no detailed plans for the property yet, but said, “Frankly, I just see Buford as part of the United States, a large and a potential market for Vietnamese goods.”