In the extreme north-west corner of North America, Alaska is disconnected from the contiguous United States, and it has little association with the rest of the country when it 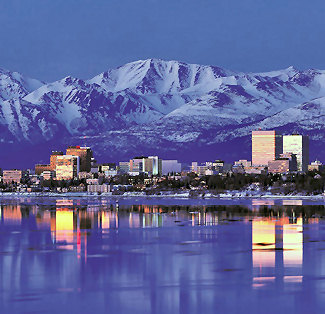 comes to hard times in the housing market. Alaska home prices are maintaining their value much more than most of the rest of the nation.

Sale prices rose about 1% a year in most of Alaska from 2007 through 2010, and slightly more in its most populated city, Anchorage. Alaska homes appreciated at a record clip from 2000 to 2006 at around 8% across the state before home sales slowed. The federal home buyers’ tax credit drove values a bit higher in 2010 before things finally slowed down.

Now the market in Anchorage has turned sluggish, but troubled home sales, including foreclosures and short sales account for less than 6% of transactions, resulting in a market that remains fairly stable. Existing home sales in Anchorage should pick-up in the spring, with housing prices forecast to climb a modest 2.3% for 2012.

The inventory of homes for sale on the market, including all residential properties is less than a six month supply, representing a balanced supply in Anchorage. That’s also close to the same figures for Juneau, where the average home price is a bit higher than Anchorage.

Sales typically slow during the cold winter months in Alaska before picking back up when the weather warms in the spring. Juneau is projected to see better homes sales, driven by near record low mortgage interest rates in the spring. Home prices are forecast to follow suit, appreciating a modest 2% by years end.

The housing market in Fairbanks is hardly making any headlines similar to the other communities in America’s last frontier. Fairbanks home prices haven’t suffered or deflated like most other markets in the rest of the nation.

Housing prices in Fairbanks have also remained fairly stable, barely moving at all unlike other places where the foreclosure crisis has made a huge impact on home values. However, new home construction has softened but that’s because of less demand and lenders that are making it more difficult for new home builders to obtain financing.

The housing market in Fairbanks should see that change when banks decide they want to start lending more once the national economy starts to improve. Until then housing sales will be sluggish and are projected to increase in value about 2% for the year.