Wisconsin’s real estate market is on the upswing, and experts say the trend will continue through 2013. 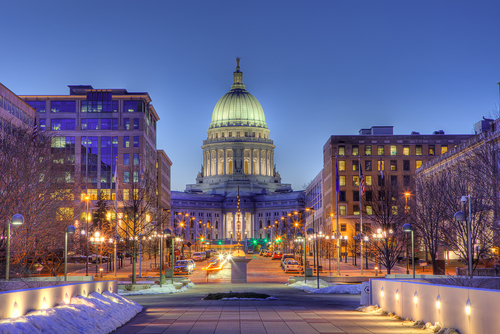 The Wisconsin Realtors Association reported that February, 2013 was the 20th straight month of double-digit growth in sales of existing homes statewide, with the month’s final numbers indicating a 12 percent increase in sales over February, 2012.

In related news, according to Baraboo News Republic (“Real estate market making strides,” March 22, 2013), “median home prices for February were up approximately 6 percent. Of six regions statewide, five saw an increase in home sales this February, with south-central Wisconsin noting sales up almost 12 percent, according to the association. Compared to the same month last year, Sauk County had about a 15 percent increase in the median home price but fewer sales by about 11 percent.

“Terry Monroe of Stark Company Realtors in Baraboo said in the area, the median price for single-family residences is increasing. By this time last year, there had been 34 homes sold in the Baraboo High School district, Monroe said. So far this year, 35 sales have been recorded, but the median price has gone from $116,500 to $144,500. ‘There’s a nice big jump in the median sales price as far as that goes,’ he said.

“According to Monroe, the number of listings in the same area is up, too. By this time last year, only five single-family properties had been listed in the Baraboo area. So far this year, 55 have been listed, Monroe said, citing data from Multiple Listing Service.

“He said the changes signal that more people feel comfortable getting into the market. ‘They’re feeling a little more solid ground as to what’s going on in real estate,’ he said.

“David Vander Schaaf of Century 21 in Baraboo cautioned against being too optimistic about statewide trends that seem to suggest an improving housing market. Regionally, areas farther from Madison have not shown the same type of improvement. ‘If you look at WRA statistics, all those numbers are really positive, and their numbers tend to include a lot of Madison-related numbers,’ he said.

“Generally, things seem to be improving, but there aren’t enough local statistics to gauge where the area stands as far as the recovery process is concerned, Vander Schaaf said. It likely will take several years to see whether the market has really turned around. ‘In general, things in the area are still kind of flat, but here and there are some good stories for sellers that have a nice, maintained home that’s in good condition,’ he said.

An article in The Business Journal, which covers the greater Milwaukee area (“Milwaukee-area real estate market improves in early 2013,” April 2, 2013), “the real estate market in the Milwaukee area kicked off 2013 on a high note, with activity in industrial, retail and office buildings filling empty space, according to the Commercial Association of Realtors Wisconsin and Xceligent.

“As has been the trend, the industrial market performed the strongest in the first quarter, with 859,000 square feet of positive absorption and an overall vacancy rate of 6.4 percent. That is a slight improvement over the end of 2012.

“Office buildings at every level of quality had positive absorption. The overall market closed with a 20.7 percent vacancy rate. However, vacancies for Class A buildings declined from 15 percent at the end of 2012 to 14.6 percent in the first quarter of this year.

“Court records show there were 636 foreclosure actions filed in Kenosha, Milwaukee, Ozaukee, Racine, Walworth, Washington and Waukesha counties last month, a decrease of more than 33% from 955 in March 2012.

“‘I think it’s an amazing turnaround,’ said Russell Kashian, a University of Wisconsin-Whitewater economics professor who tracks residential real estate and foreclosures in the state. ‘It’s almost like there was a tipping point in 2012 and we got past it, and that correction we’ve been waiting for has finally come. And it’s come in a big way.’

“Kashian said the slowdown in foreclosure filings has occurred in almost every county in the state.

“While the economy slowly is improving and the housing industry in general has been mending for almost two years, Kashian said he thinks one reason foreclosure filings are dropping is simply that most of the Wisconsin houses that ever were in jeopardy of going through it have done so.

“’Forty percent of Wisconsin homeowners own their homes free and clear, and 20% are virtually free and clear because their mortgages are so low,’ Kashian said. ‘You only have a subset of the market that was exposed to begin with, and after you’ve hammered it for five years, you kind of run out of people to go after.’

“If indeed the foreclosure crisis is concluding, court records will show that its worst year was 2009, when 12,745 mortgage foreclosure actions took place in southeast Wisconsin.

“Data Tuesday from the Greater Milwaukee Association of Realtors also shows a declining number of homes sold via foreclosure proceedings or short sales, in which the lender lets the house be sold for less than the mortgage balance. In the first quarter of 2013, there were 492 sales of distressed properties, down 10.7% from 551 in the first quarter of 2012.