The fact that Oklahoma possesses one of the most prosperous housing markets in the United States is no longer news to anyone. Many touted the 2014 Oklahoma housing market as one the best markets in the country for quite a long time now; in fact, in early April 2010, a Business Week report listed Oklahoma as one of the strongest markets in the country. The estimate includes a 3.6 percent rate of growth for home prices over the course of four years. The increase in home prices began at the median price of $87,427 in 2010. At the time, the median family income stood at $48,100, and the state’s population stood a little over 113,000. Experts predicted that the Lawton area would become the next ‘big thing’ in the state’s real estate market.

Experts mostly based the aforementioned prediction on the evolution of the Lawton region during the previous year. In 2009, the median housing price in Lawton grew by 6.4 percent on a year-to-year basis, pegging it as one of the least volatile markets in the state. Fiserv regarded the market in question in a positive light. This speaks to its impressively low peak-to-trough rate of pricing decrease by no more than 3.4 percent. At the time, experts believed Lawton would recover faster than Oklahoma City or Tulsa. But, did this forecast become reality in 2014? And if you are interested, you can read the forecast for the 2013 Oklahoma housing market here. 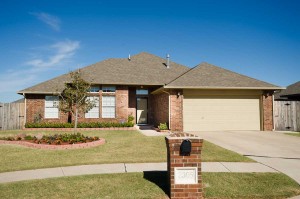 To a certain extent, the predictions came true. Many experts still regard the 2014 Oklahoma housing market as one of the most profitable and worthwhile areas to invest into in the entire United States.  An article published by Forbes in late 2013 mentioned a movement not many readers had considered at the time: property investments and the best cities to buy into for investment purposes. The author’s examines the massive buyout of foreclosures over the previous years and the slow increase in price (which drove away corporate investors). This prestigious financial publication culls figures from the Local Market Monitor. It also factors in population, home prices, the local economy, and jobs. Oklahoma wasn’t just included in the list, but the article also mentioned it as one of the top attractive markets in the country alongside Texas. Oklahoma’s high rankings stemmed from the state’s low rate of unemployment and its recently developed-upon energy resources.

The main difference between 2010, late 2013, and the 2014 Oklahoma housing market relates to the targeted areas for investment ‘best buys’. By the end of last year, Oklahoma City took the top place in the state by ranking at number 7 on Forbes’ list of the best cities to invest in real estate. With a population a little over 1.2 million citizens and an actual median home price of $159,713, Oklahoma City also boasted a 16 percent 3 year increase forecast at the time. It wasn’t just Forbes who caught on to the positive signs displayed by the Oklahoma City housing market as 2013 drew to a close. CNN also noticed the city’s major potential and listed it as one of the top five housing markets to keep an eye on in 2014.

So, what made OKC so attractive at the end of last year? Well, several factors did. These factors include the following:

Facts, figures, and forecasts provided by real estate portal Trulia also address other advantages of buying property in the Oklahoma City market. For one thing, nearly three quarters of the homes for sale in the city’s market remain affordable for most middle income earners across America. Additionally, a lot of building is taking place in the metropolitan area. The building permit approval rate in the city increased by 142 percent since 1990. In 2013 alone, that segment of the construction market experienced a 42 percent increase in the number of permits issued. Forbes (along with other major media outlets) reported that the Oklahoma City housing market experienced impressive levels of growth in 2013.

However, in mid-May 2014, esteemed credit rating institution PwC slightly lessened the city’s image by demoting it 11 places in its ranking. This decrease resulted in the city sliding down to number 43 in the yearly “Emerging Trends in Real Estate” report for 2014. Interestingly enough, around the time the report was published, PwC just opened a new branch in Oklahoma City; however, the report is not based on company estimates. Instead, PwC bases their report on interviews with numerous experts in the real estate field which include developers and brokers. The drop may ‘let down’ some analysts or potential buyers. But, considering all of the past strong numbers (and the strong figures from this year), a small amount of ebb and flow is healthy for any real estate market. It shows sustainability and consistency. In the report, the authors explained that the 2014 respondents to their annual survey held “a less favorable outlook” for the biggest city in the state. While the investment and development potential remained positive, the lag in home building estimates caused some industry experts to demote the OKC market. They explained that other markets slightly surpassed Oklahoma City in terms of pace and scope of growth. We should bear in mind that a market which suffered less than others in the throes of the crisis would respectively slow down in growth sooner than those which were affected and are only now coming around in the post-recession era. OKC is still alive and well. Considering the health of the overall Oklahoma market, it’s still worth investing in.