The U.S housing market has done well so far in 2018 with sellers benefiting in most states. There is a demand for more homes in general as recent tax laws have increased wages for many Americans. While many states are in a dire need for more affordable homes on the market instead of mid to high-end properties.

If you are interested in buying a new home, the time to act is now. Although it is a competitive market in most areas, interest rates are the lowest they are expected to be for a while. Real estate experts predict that mortgage interest rates will rise by the end of 2018, which may cause the housing markets in various states to decline.

A Look at West Virginia’s Economy and Housing Market

In April of 2018, a report of West Virginia’s economy was released that held important data about labor markets, employment, the economy and more. It also featured a section on the status of the West Virginia housing market.

Overall the employment rate for the state has risen steadily while the unemployment remained the same at 5.4%. All reports on the housing market were positive.

See our Prediction for 2018 Predictions for the Missouri Housing Market

The state of West Virginia issued 192 residential permeants during February. That is up from 159 permits issued the month before, and up from 167 issued in February 2017. In the state’s metro areas, the activity for housing permits was also on the rise while it decreased in areas such as Parkersburg and Morgantown.

Based on the most recently collected data, home values in West Virginia had depreciated only 0.8% in January and had gone up in appreciation by 2.3 from the previous year. All metro housing prices were on the decline, except for those located in Morgantown.

New private housing units were issued to the areas of Charleston, Huntington, and Parkersburg in February, with Charleston receiving the most.

Because the status of the West Virginia housing market often coincides with how well the employment market is doing, it’s a good idea to look at these factors as well.

This year improvement in the Labor Market for West Virginia looks promising. There were 31,000 new jobs added to payrolls in February. That is a 0.4% increase. Most of these new jobs were in the leisure and hospitality industries, as well as the trade industry, transportation, and utilities.

The construction industry saw the most significant improvement in employment in February, with the largest percentage increase of 143%. There were 4,300 jobs added since last February.

On a year-by-year basis, employment in West Virginia has grown by 1.0% which translates to around 7.300 jobs.

How West Virginia’s Housing Market Has Improved Over the Years 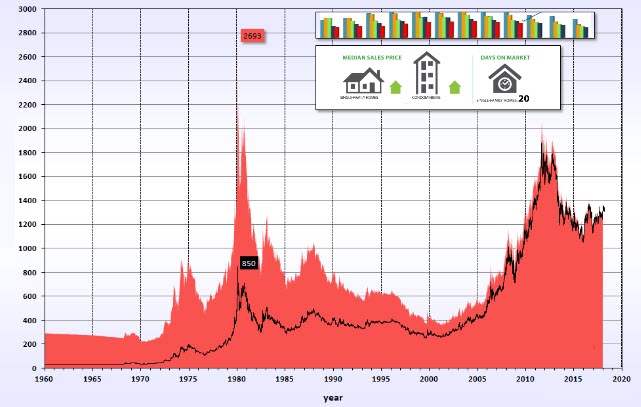 It has a slow progression since 2010 as the housing market in West Virginia worked hard to bounce back from the failing economy. They were finally able to see improvements beginning in 2010 as the state had the second lowest number of foreclosures in the country.

Morgantown was one of the first cities to have a strong demand for housing following the financial downfall of the nation. And Forbes magazine ranked Morgantown as the 10th best small city in the nation to conduct business.

Cities such as Fairmount showed success as they were one of the most stable housing markets in the country. While the state was still struggling with high levels of unemployment and poverty, the housing market was showing plenty of potentials.

Another great example of the growing economy and West Virginia housing market is the Charleston housing market. Ever since 2005, officials have worked on the redevelopment of the riverfront area in the city.

The West Virginia Housing Market for 2018

According to statistics from Zillow which compiled data on West Virginia home prices and value, the median home value in the state is at $94,002. The estimated home value for properties in West Virginia has gone up 1.1% within the past year. Zillow predicts that the housing market will grow as much as 3.6% before 2019.

Based on data collected from February 2018, the current market health for West Virginia is on the decline with a score of 2.1 out of 10. Homes stay on the market an average of 113 days. With the real estate market improving throughout the country, experts believe that the West Virginia housing market will also do well throughout 2018.