Two and a Half Men TV star Ashton Kutcher has reportedly 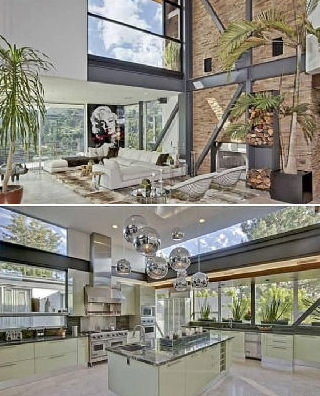 bought the estate he has been living in located in the Hollywood Hills out from under teen singing sensation Justin Bieber.

You see Biebs bought the home or attempted to buy the estate Kutcher was living in on his 18th birthday just a couple of weeks ago. But when Kutcher found out about the effort to purchase the home he was renting after splitting from wife actress Demi Moore, the actor made an offer to buy the estate himself.

Kutcher can afford the price tag too – since he just inked a new deal with CBS management for $1-million an episode to head the Monday night comedy.

The former Punk’d host took the lead position on the show after Charlie Sheen got into a very public and disturbing display of showmanship with CBS management.

Celebrity website TMZ reported that the estate came in $6 million under its asking price in the appraisal made for the Biebs effort to purchase the place. There’s no word yet on how much Kutcher paid but it’s in the multi millions.

Don’t feel too sorry for Bieber though. He’s estimated to be worth $53 million by Forbes magazine and he has singer Selena Gomez for a girlfriend, a hottie many other guys would kill for.

Ashton’s new bachelor pad sets high in the Hollywood Hills on a half-acre lot with wonderful views of the surrounding landscape and Lake Hollywood. The contemporary designed home features an extensive use of glass integrated into the design with floor to ceiling windows, glass-floor bridges and balconies that open the home up to take in the spectacular views and enjoy the great California weather.