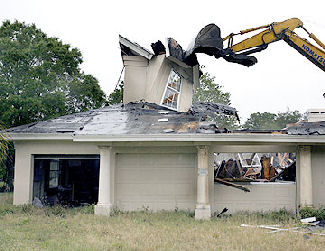 the U.S. after they foreclose on them in order to free up capital and get a tax write-off on the properties.

Bulldozing homes in blighted neighborhoods is becoming more commonplace in order to handle the growing problem of dilapidated structures taken back by bankers in the growing foreclosure crisis. New York State became the newest state to approve legislation to deal with the problem of vacant homes in the fallout of the crisis.

New York Governor Andrew Cuomo followed Ohio and Michigan to pass legislation to develop land banks that allow governments to take control of troubled properties to rehabilitate or demolish them so the land can be used for other purposes. The move is usually a last step effort to improve neighborhoods with homes that are rotting and are often taken over by vagrants and drug users. 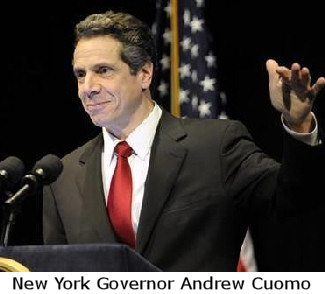 Demolishing vacant homes is a growing issue in Western New York, where blocks and blocks of neighborhoods have been left abandoned for the structures to fall into decay. The land bank program has worked in other cities across America like Flint, Michigan, which was destabilized when the auto industry suffered its major downturn and residents fled for jobs to other cities.

The U.S. Census Bureau says 18.4 million homes are vacant in the nation, and analysts advocating for land banks estimate that at least a third of those are uninhabitable or unsafe for human residency left to rot in the summer sun.

Laws to develop land banks to take over rotting neighborhoods have also been proposed in three other states, which have been battling with vacant homes. Pennsylvania is still suffering from fallout from the steel boom that went bust more than 20 years ago, while Georgia and Tennessee have legislation that has been proposed to destroy homes in areas that have become to old and unkempt to provide safe housing.