The best housing markets forecast for the next five years are composed of 10 cities scattered from Washington State to Florida. These 10 U.S. 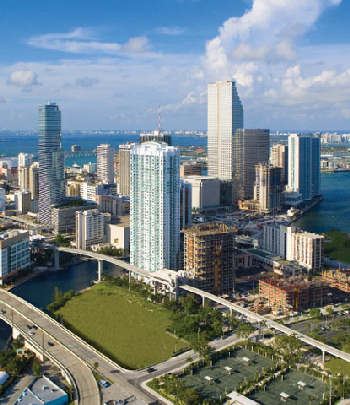 cities are projected by Housing Predictor to have the highest probability of appreciating the most for all cities in the nation through 2016.

Most of the best real estate markets are centrally located to attract a large number of sizeable employers, and are likely to produce better regional economic conditions as a result. A few are exceptions to this rule, including Miami, which tops the list with the highest projected housing inflation.

Miami is an international designation for vacationers and has become a world class resort community, attracting home and condo purchasers from all over the world. If there’s ever been a time to buy housing in Miami in this decade, chances are this is it.

Across the nation, San Francisco ranks second on the list. A rich diverse cultural mix of people has transformed the greater Bay Area into a world class city to make home. Further south on the San Francisco Peninsula, Los Altos ranks third. Ushered in by the rich high tech business, more millionaires are busting out on the peninsula than anywhere else in the U.S. and the majority of buyers are paying cash for homes.

Seattle has weathered the housing downturn better than the majority of the nation, despite a sizeable decline in home values. The city has a reputation for getting more rain than most other places and it’s an anchor for major employers, including Microsoft, Amazon and Boeing. Higher salaries paid to workers should bolster the housing market.

Medford and Eugene, Oregon should also lead the nation out of the housing downturn, with higher home values than most of the rest of the country over the next five years, a necessity to be named to the list.

As a recognized leader in the wine industry, Napa is forecast to see more economic growth than ever before in its history, pushing new home construction and values much higher.

Naples, Florida has been a vacation destination for old time east coast residents for decades and shouldn’t have much of a problem re-establishing itself over the next five years.

Austin, Texas is a technological hub attracting a younger sector, and lots of growing companies supplying jobs to bolster the housing market.

Lastly, Tucson, Arizona should be re-energized over the period to reemerge as a growing boom town in the new decade.