A man who violently shot up a real estate office in Valparaiso, Indiana threatening to shoot employees last week before taking his own life, is 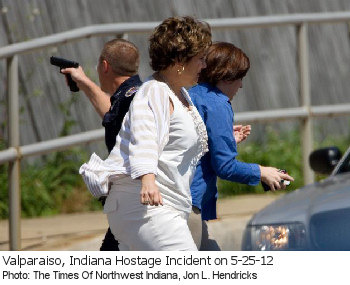 only the latest hostage taker to blame real estate agents or bank employees for financial problems.

A series of separate violent out-breaks across the U.S. over the past three years have involved real estate offices and banks who provided the financing for homes involved in foreclosures or bank threats to formally repossess property. The events mark a major turning point in the escalation of violence that is breaking out in isolated episodes, and is widely expected to increase among law enforcement authorities in coming years.

This kind of violence ushered in by free market capitalism enables deranged individuals to capture their victims toting hand guns into real estate offices and banks, and take them as hostages.

A convicted terrorist in New York City also drew at least some of his anger for the U.S. and his emotional conflicts from a foreclosure he was under going. The loss of his New Jersey home was initially blamed on a job loss.

An escalation of domestic violence is also resulting from financial pressures in many homes, with an increase of spousal abuse. The House of Representatives passed the reauthorization of Violence Against Women Act two weeks ago in Washington, D.C. to curb widespread waste and fraud in the domestic violence field.

The escalation of violence has long been expected by law enforcement personnel at every level, who have undergone special training to prepare for additional outbreaks. Some real estate brokers with large staffs are taking steps to protect their employees, installing security cameras and other precautions, and even offering special defense training classes to employees.

Two gun shots were heard by police Friday afternoon before SWAT team members swarmed into the Indiana Prudential real estate office, where the gunman held employees several hours. The gunman apparently attempted suicide. He was rushed to a nearby hospital, where the man was later pronounced dead.

“It only takes one nut to walk into an office and take hostages,” said a law enforcement officer. “Sometimes when people deal with other people’s money maybe they should give that a lot of thought.”

In the Valparaiso case, the man reportedly appeared at the real estate office to collect a debt that was owed him from an office worker. The transition from an age of darkness, violence and greed is forecast by both the Mayan and Hindu calendars in 2012 to an era of enlightenment, justice and peace.