A massive class action lawsuit has been filed against Bank of America by the Texas Housing Justice League, representing 15 mortgage holders charging the nation’s biggest bank with “a systematic home loan servicing scheme.”

The lawsuit by the Texas Housing Justice League (THJL), a nonprofit may eventually involve thousands of Texas mortgage holders, who charge they have suffered abuse and financial damage at the hands of BofA employees handling their mortgages. Only three of the homeowners have been foreclosed as a result of problems. 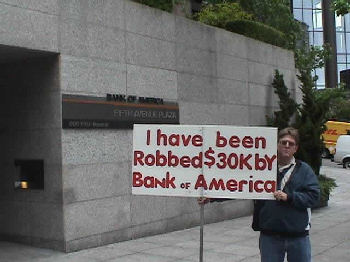 The suit was filed in U.S. federal court in Victoria, Texas a small community just 30 miles north of the Gulf of Mexico, about a two hour drive south of Corpus Christi.

The lawsuit alleges that BofA mortgage holders have suffered hours of telephone run around, misleading and inconsistent information, lost correspondence, verbal abuse, and extensive delays in efforts to get home mortgages modified. “The facts in this case reveal the harsh reality that underlies the loan servicer’s press statements about loan modifications and forbearance agreements following the collapse of the U.S. housing market,” the suit states.

“This is not an isolated case,” said Attorney Molly Ann Rogers, who represents the plaintiffs in the lawsuit. “It is the normal way the bank handles business.”

The plaintiffs’ attorneys say Bank of America breached mortgage contracts, were negligent in representations made to borrowers and in violation of the Texas Debt Collection Act. Many of the plaintiffs were told they were eligible for loan modifications or other work out assistance by the bank, only to spend months being shuffled through BofA’s “Home Retention” department and other departments only to receive foreclosure notices on their homes.

Plaintiffs’ attorneys are seeking financial damages, and attorneys fees but the suit does not specify an amount being requested. BofA is expected to issue a response to the lawsuit in September.

“Instead of providing plaintiffs with basic information about the servicing of their loans and providing timely screenings for workout assistance, however, ‘Defendant BAC’ (BofA’s servicing company) misrepresented material information to the plaintiffs about their loans, and forced them into a scheme of operation so dysfunctional that the constant barrage of misinformation, misdirection, and deliberate inactivity amounted to abuse and harassment,” the suit charges.

Victims of the abuse describe feeling “harassed,” “like a yo-yo,” and “blocked at every turn.” When borrowers called BofA the information they received over the telephone often conflicted with written statements or earlier phone conversations.

In many of the calls, BofA representatives spun plaintiffs in a long series of telephone transfers from one department to another. Plaintiffs spent hundreds of hours on the telephone, explaining their problems to a different representative each time they called. Requests to speak with managers were met with resistance or disconnected phone lines.

Some of the plaintiffs named in the suit sought face-to-face meetings with Bank of America representatives in branch offices only to be referred by local bank employees to the same departments at long distance call centers.

Donna Batts of Austin, Texas, was served with foreclosure papers on her home after working out a deal with the bank to modify her mortgage. Batts’s 6-year-old son must be administered breathing treatments by his mother three times a day for asthma and other health problems, and any move to another location could jeopardize the youngster’s health.

The suit seeks an injunction against BofA loan servicers to refrain from practices, policies and plans that result in the banks series of problems to deal with homeowners at risk of foreclosure. “Misrepresentations that jeopardize a borrower’s home are unconscionable and the damage is irreparable. Defendant BAC’s misrepresentations to borrowers are systemic in nature and widespread in practice,” the suit states.