An over whelming majority of Americans feel the U.S. economy is in an economic depression, despite government and mass media reports to the contrary. A huge 87% of all those surveyed in the latest Housing Predictor opinion poll say the economy is in a depression.

The down beat poll found that only 13% surveyed in the online poll felt that the economy is not in a depression. The survey was conducted over a two week period ending today and has a margin of error of just 4 to 5%. 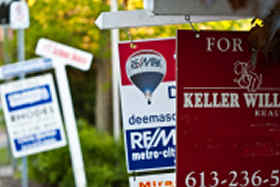 The poll indicates that despite U.S. government leaders saying the economy has pulled out of an economic recession, Americans don’t feel that it has with unemployment nationally holding at 9.5%, and real unemployment counting those that have stopped looking for work all together ranging much higher.

Housing Predictor analysts are confident times will improve, but it seems like just about everybody else we wonder how long the downturn will persist.

Bank foreclosures and bankruptcies are at all-time highs with more than 7.3-million homes that have already been reposed, according to government officials. The real estate crash set in motion a series of events that have dragged on the national economy for more than two years. Business failures in many of the nation’s hardest hit regional economies are reaching epidemic levels.

Consumer confidence has also weakened over the last year as more Americans lose jobs due to business closings, indicating that a jobless recovery for the economy is not really a possibility. A series of government programs have been launched by the Obama administration with TARP funds, but few seem to be working rapidly enough to push the economy to move into a real recovery.

Despite mass media attention and U.S. government reports, do you feel the U.S. is in an economic depression?