Christie Brinkley has graced the cover of over 500 magazines over the years, raking in millions of 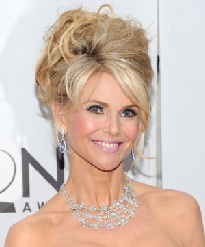 dollars in modeling fees as one of the world’s most sought after supermodels. And now as luxury home sales make inroads towards a recovery, Brinkley has placed her spacious Sag Harbor, New York estate on the market for sale.

The Greek Revival house sits on 4.5 acres of harbor front and is listed at $15.75-million after the model and sometimes actress spent millions of dollars in remodeling and modern updates on the place in the seven years she’s owned the 5,500 square foot home, which features 5 bedrooms, 5 and a half bahtrooms and a sparkling swimming pool. It’s also a great place for entertaining with 327 feet of beachfront overlooking Sag Harbor and Shelter Island.

The three story home was originally constructed in 1843 and boasts turn-of-the-century  details such as wide-plank pine floors and an oak banister with four fireplaces to warm the place during those cold winter nights.

Property records indicate Christie purchased the estate in 2004 for $7.15 million through a trust. At the time it was said she bought the home as a gift for her then husband, Hamptons architect Peter Cook, who had a well publicized affair with then teenager Diana Bianchi, which ended their marriage in 2008.