As the foreclosure crisis hits its peak, counties across the country are flooded with default filings. Many can’t keep up with the record volume as county recorder offices drown in the massive onslaught. Especially hard hit counties are taking foreclosure sales off the courthouse steps, outsourcing them to auction services online. 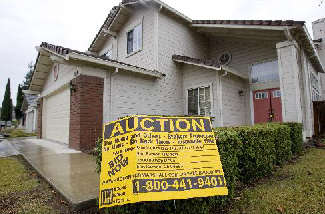 Some 2.5 to 3-million properties are forecast to be foreclosed in the U.S. in 2010 alone as a result of the financial crisis and bankers that are either unwilling or say they are unable to negotiate with homeowners. The loss to victims of the foreclosure crisis has transformed into a boom for eager bargain hunters.

Sarasota County, Florida was one of the first counties in Florida, hard hit by the crisis to outsource its foreclosure auctions, deciding it was better to take the heavy volume of sales online instead of trying to play catch up with the daily flood of foreclosures. The county recorder’s office selected a company, where bidders can make offers on property online.

In Florida like California and other states suffering through the throws of the crisis, many of the homes and other properties that come up for auction aren’t sold to public bidders because the prices banks and mortgage companies demand are higher than what is listed on the open market. Banks often routinely buy them back through the auction process and then usually much later, as much as a year later, list them for sale at a reduced price.

As the foreclosure crisis worsened Lloyd McClendon looked at opportunity for his fledgling company. McClendon developed software now used by dozens of counties to sell foreclosures at auction over the web. Anyone can register to bid on the site at RealAuction dot com, which even offers a proxy bidding system in case you don’t have time or can’t be available at the time an auction is held.

The automatic system raises the bid by a dollar until it reaches the bidders pre-set limit. Perspective buyers are required to make a deposit to bid online for properties.

“Any bids (made that) come in with less than thirty seconds left in auction, it extends the auction by one minute and gives everyone a chance to see what the new high bid is,” said McClendon, whose company auctions off thousands of properties weekly. “There are fantastic deals to be had for anyone looking at foreclosures.”

Property purchased at auction typically are required to be paid for by the end of business the day they are won in cash, but some areas of the country allow a day or two longer. All properties are paid for in cash and are still run under each state’s auction laws, which vary and can include redemption periods.

Some states like Alabama allow mortgage holders who have lost homes to foreclosure up to a year to redeem their property, forcing auction winners to return the property to the former owner.