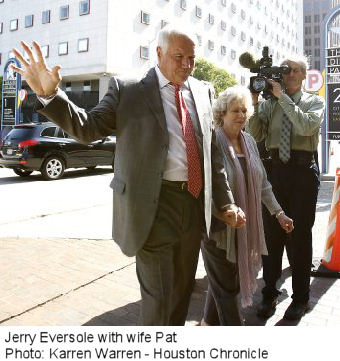 influenced the county commission in a land scheme allegedly for more than a decade.

Houston developer Michael Surface admitted that he intended to influence former Harris County Commissioner Jerry Eversole with $100,000 in cash and gifts prosecutors say was a bribery scheme. Both of the men pled guilty to a single felony count in exchange for a lesser sentence in the case in a deal they worked out with prosecutors.

As part of the plea arrangement, Jerry Eversole and Michael Surface both admitted that beginning in 1999 Surface obtained at least five lucrative Harris County contracts to build and house county offices and provide construction maintenance to the county.

Both men also admitted Eversole voted to approve Surface’s projects and used his official position to ensure funding for the contracts. Eversole also repeatedly voted to appoint Surface as chairman of the board of the Harris County Sports and Convention Corporation, a quasi-governmental organization that oversees Reliant Stadium. 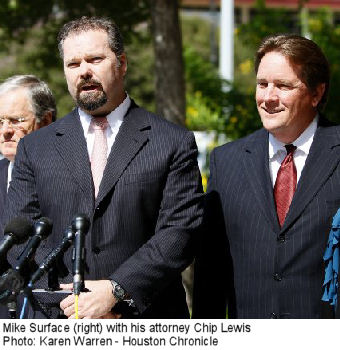 Jerry Eversole, 68, who resigned from the county commission two weeks ago admitted to no wrongdoing associated with his public office in the agreement, making an admission that he only lied to the FBI in their investigation of the case.

In exchange for the former commissioner’s guilty plea, prosecutors dropped charges against him of conspiracy, two counts of making false statements on federal income tax returns and bribery. Eversole was tried on the charges earlier this year, but the case ended in a hung jury.

In the trial held in federal court in Houston, prosecutors alleged Michael Surface paid for trips, $35,000 for antique firearms and made a $63,000 payment to help Eversole purchase a new home. Surface pled guilty to only filing a false income tax return as part of the agreement worked out with prosecutors.

“Mr. Eversole lied to the FBI about receiving money and other items of value that Mr. Surface admitted he provided,” said Assistant U.S. Attorney General Lanny Breuer. “Mr. Surface in turn, lied on his tax returns about the money he provided to Mr. Eversole to gain influence, and lied to the FBI about providing things of value to a separate Houston city official. The public must be able to trust that its elected officials are fulfilling their duties honestly and without influence from individual favor-seekers.”