Home prices have clearly shown a double-dip is underway in the housing market, according to real estate data provider Clear Capital. 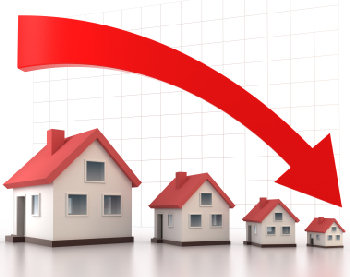 The values of residential properties fell 0.7% below prior lows in 2009 as forecast by Housing Predictor. The drop in home values demonstrates that markets remain stressed as a result of the foreclosure crisis.

Home prices dropped 11.5% on a national basis over the past nine months through April, according to Clear Capital, which sells its housing forecasts to companies, including hedge funds. The decline is at the steepest level in three years. The drop in property values and REO levels are similar to 2008.

Volatility driven by foreclosures, an over-supply of homes priced higher than what they would appraise for in the current marketplace and bank servicing company problems add to the decline in home values. More than one-in-four U.S. homes are underwater on their mortgages, leading an increase in homeowners to walk away from their homes.

“The latest data through April shows a continued increase in the proportion of distressed sales that are taking hold in markets nationwide,” said Dr. Alex Villacorta, director of research and analytics at Clear Capital. “With more than one-third of national home sales being REO, market prices are being weighed down as many markets have not regained enough footing to withstand the strain of the high proportion of REO sales.”

As property prices reach new lows in many areas of the country, however, hopes remain high for a recovery in spring time home sales. Clear Capital says the bank owned or REO saturation rate reached 34.5% in April with the home buying season being the first since 2008 without government incentives.

The decline in home values has slowed since the downturn started in 2006 with mixed seasonal gains in some housing markets providing an appearance that home prices are stabilizing. However, tight mortgage lending standards and an over-supply of cheaply priced foreclosure properties delay most markets from turning the corner into recovery.