The thought of Congress wiping out two major institutions like Fannie Mae and Freddie Mac even over a long period of years is mind-boggling. 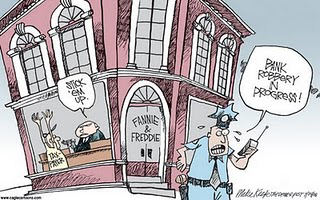 It’s extraordinarily rare when government giants fall, and you can bet your last dollar that it’s not going to be when Congress is being beaten like a dead alley cat by the pundits on TV.

Eight Republican proposals in Congress have been offered to wipe out the government sponsored enterprises, blamed for so much of the housing mess. The two government giants have been bailed-out by tax payers and will continue to be as tax payers pay the price for banks and mortgage companies selling mortgages to anybody and everybody who could sign their name. It’s clearly another case of privatized profits and socialized losses. And it’s all because our great powers-at-be looked the other way.

It’s a convoluted game of the rich getting richer and the poor and middle class being wiped out more everyday by the powers at be in our class society. Those that bought real estate investments first or got out in time before the market crashed generally did well. For the others, when the music stopped, without a chair to plop down on the suffering has gone on ever since.

Lenders Processing Services (LPS) latest foreclosure data indicates the average mortgage in default is now 537 days late. “The system” is clearly at a loss, struggling to catch up with the fragmented foreclosure crisis. More than 7-million homeowners have been foreclosed so far, and millions more will lose the places they call home before this crisis passes. 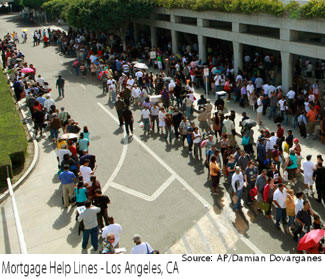 Many of the “little people” as former British Petroleum Oil Company CEO Tony Hayward would say have sustained or are suffering through foreclosure. The crisis has been at epidemic levels for more than three years. Government programs clearly aren’t working to aid most mortgage holders who are in trouble, and some heartless politicians want to cut off any help all together. That’s right. Knock um’ while their down.

There really isn’t much worse that anyone could do. It’s kind of like a street mugger kicking the chair of a paraplegic in a wheel chair, throwing the cripple to the ground and then stealing his wallet – heartless. Thousands of people who email Housing Predictor say that’s what it’s like. Millions are also in negative equity positions in their homes, and most of those mortgages are held by Freddie Mac and Fannie Mae. A survey not long ago showed that more than half of the respondents said they would walk away from their homes if housing prices continue to go down. This is a monster of a mess.

Congress is great at one thing from what I see, and that’s wasting time. They hold hearings for everything. Political grand-standing has gained a whole new persona with the cable news networks and CSPAN. It’s no wonder why more people are turned off at the news media more than at any other time in history.

Government political domination of the housing sector has been fait accompli for decades. Any real effort to remove its artificial support would result in the economic and political collapse that no politician could sustain. Home prices would crash further, reaching levels that would make the Great Depression look good. Decades of federal “socialized” support for the market have left it riddled with troubles.

Banks and mortgage finance companies are ill-equipped to handle the massive volume of mortgages that need to be made on their own to balance the supply chain of real estate markets, and they aren’t going to take the risk now in a declining marketplace. Who can blame them?