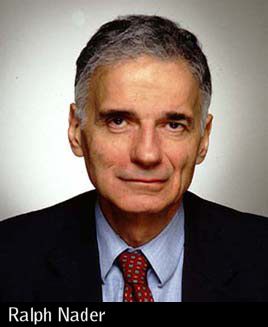 statements related to the financial health of failed Freddie Mac and Fannie Mae, the governments two mortgage giants, which have been bailed-out by tax payers at a cost topping $150-billion so far.

The political activist, who last ran for the U.S. presidency in 2008, sent a letter to the Treasury Department Inspector General and chairman of Congress House Financial Services Committee requesting the federal investigation. Nader, who lists himself as an investor in the government sponsored enterprises wants to know whether government officials made misleading statements in the days leading up to the government seizure of Fannie and Freddie.

“The Treasury Department Inspector General and congressional committees with appropriate jurisdiction are in the best position to conduct a thorough investigation of the way Fannie Mae and Freddie Mac common shareholders have been used and abused by the Treasury Department,” Nader wrote.

Statements made by Federal Reserve Chairman Ben Bernanke and Rep. Barney Frank (D-Mass.) in the days leading up to the government’s takeover of the troubled lenders gave the impression that the GSEs were “financially sound,” Nader wrote.

The political activist is calling for the investigation, despite growing concerns over Congress inability to handle debate in the growing financial mess associated with the two lenders, which supply funding for more than 90% of all current U.S. mortgages. 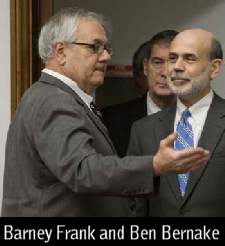 The consumer crusader also raised other questions related to Fannie and Freddie in his letter, including concerns over decisions by federal judges to prohibit the filing of lawsuits against GSE managers over the financial condition of the two giant lenders.