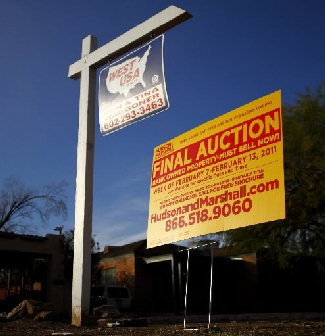 seems more doubtful of achieving by the day as bankers delay talks to stem off billions of dollars in settlements they would have to pay to reach such an agreement, estimated as high as $25-billion.

The proceeds would be used to compensate homeowners and other individuals who have been improperly foreclosed or kicked out of their homes due to fraudulent errors made by employees working for the banks signing hundreds of documents a day without confirming their authenticity to move the foreclosure process along.

Lending institutions, including JP Morgan Chase, Wells Fargo and Bank of America face a series of lawsuits as a result. In an earnings call JP Morgan CEO Jamie Dimon said losses from foreclosures are costing his company an average of $4-billion annually. “We are adding a lot of intensive manpower and talent to fix the problems of the past,” said Dimon.

Federal sanctions taken against 14 banking organizations Wednesday do not preclude federal agencies from taking additional actions. However, the lack of a settlement between the nation’s largest banks, mortgage companies, loan servicing firms and state Attorney Generals sheds a cloud on the state investigations.

The Federal Reserve also announced formal enforcement actions Wednesday against Lender Processing Services, Inc. (LPS), a domestic provider of services related to foreclosures, and against MERSCORP, Inc. (MERS), which provides services related to tracking and registering residential mortgage ownership and servicing, acts as mortgage of record on behalf of lenders and servicers, and initiates foreclosure actions.

The actions address compliance failures, unsafe and unsound practices at LPS and its subsidiaries, and at MERS and its subsidiary, according to the Federal Reserve. The action requires LPS to correct deficient practices related to the signing of foreclosure documents, which occurred in mass in an Atlanta, Georgia office complex through its subsidiaries DocX, LLC, and LPS Default Solutions, Inc.

MERS is required to correct weaknesses in oversight, management supervision, and corporate governance. The LPS action is being taken jointly with the Office of the Comptroller of the Currency, the Federal Deposit Insurance Corporation, and the Office of Thrift Supervision, while the MERS action is being taken jointly with those agencies and the Federal Housing Finance Agency.