Freddie Mac, one of the nation’s two troubled mortgage giants reported a net loss of $4.7-billion today, a better $2-billion less than its loss in the last quarter.

The total loss reported to shareholders was $6-billion after holders of its stock were paid $1.3-billion in dividends. The loss equates to $1.85 a share, demonstrating an improvement with a lower loss per share, which suffered a $2.45 loss each share in the first quarter of the year. 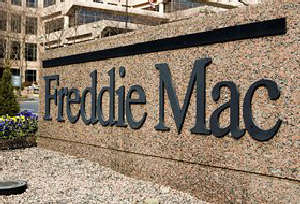 The better loss report comes just eight days before the Obama administration is set to hold a major conference on the future of Fannie Mae and Freddie Mac, the nation’s two mortgage giants August 17th. The White House conference is being held after the passage of Financial Reform legislation, most of which will be implemented over the next two years as administrators develop plans to protect the U.S. economy from further damage.

Mortgage industry members, including bankers, mortgage servicing companies, consumer advocates, real estate and building interests are expected to attend the conference, which marks a major point for lawmakers who are attempting to come up with a plan to solve the nation’s problems of the two mortgage giants. Fannie and Freddie have both been bailed out by tax payers, who have provided $145-billion to purchase mortgage backed securities, which represent the huge volume of mostly failed mortgages that the U.S. is experiencing in the foreclosure crisis.

The Federal Housing Finance Agency, started by the Obama administration to administer the daily operations of the two mortgage giants will request an additional $1.8-billion from tax payers to pay for losses that Freddie has incurred.

The crisis for the U.S. economy may have been highlighted when the stock market nearly imploded two years ago, but the nation’s real financial crisis for the economy hangs behind the wall of controversy and losses being bailed-out by tax payers at Freddie Mac and Fannie Mae.

Freddie Mac also reported a new net worth deficit value of $1.7-billion for June 30, 2010 compared to a losing value of $10.5-billion at the end of the first quarter. The deficit was attributed to paying share holders of its stock, who are mostly older or retirees’ $0.4-billion in dividend payments.

“We helped more than 150,000 struggling borrowers avoid foreclosure and provided funding that enabled more than 865,000 American families to buy or rent a home in the first half of 2010,” said Freddie Mac Chief Executive Officer Charles E. Haldeman, Jr.

“At the same time, we are promoting sustainable homeownership by helping families buy homes that they can afford and keep for the long term,” said Haldeman. “We recognize that high unemployment and other factors still pose very real challenges for the housing market, and with that in mind, we continue to focus on the quality of the new business we are adding to our book to be responsible stewards of taxpayer funds as we support the nation’s housing market.”