Down on the Gulf of Mexico tensions and anger run high. I know full well what the BP oil gusher is all about. I live here.

The gushing oil well a mile under sea spews oil at a rate that officials can’t even accurately estimate. Is it 3-million gallons a day? – More or less? 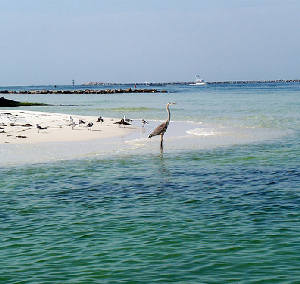 For more than a month we have waited, wondered, closely watched TV news reports, read closely, talked to friends and tossed in our sleep worried about this massive explosion of oil that is moving into destroy the environment and the economic future down on the gulf like no other menace except war has threatened man.

For nearly 10 years we’ve lived a short drive east of Destin, Florida some three and a half hours by car from New Orleans, Louisiana. The oil slick is making its way towards Alabama’s coastline, where the Coast Guard says it may arrive at Dauphin Island, Alabama as early as tonight.

It’s feared that the oil will strike the beaches here next. The catastrophe that it poses is of mammoth proportions, and it seems likely to destroy life down on the gulf that is one of America’s most beautiful natural wonders. 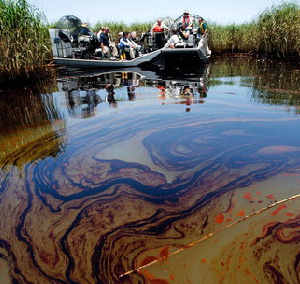 The beaches here in Walton County, Florida where we live just 2,000 feet from the Gulf of Mexico sparkle like jewels of white sugar sand in the summer sun. The Emerald waters of the gulf are still clear enough to see the bottom of the ocean on a clear warm sunny day with the naked eye from above.

As a former Californian I moved here for a higher quality of life, and now that quality is in jeopardy because of man made mistakes, errors, incompetence or carelessness.

Independent businesses still make their mark even in these trying economic times. There are still the corporate chains, but the tourists only usually patronize them. The pace of life is slower. People along the gulf try to live in harmony with nature and accept its forces.

The gulf has more than 200 species of fish, and is world renown for some of the best game fishing in the world, including Marlin.

Hurricanes are part of the way of life when Mother Nature sees fit, but man made disasters are not.

The housing market will be devastated in Louisiana and Mississippi coastlines. When the oil moves into the Florida panhandle the environmental and economic toll is likely to bankrupt BP oil. In fairness, BP says it will pay for damages, but the attorneys will deal with that. BP would be just another giant company going bust. BP’s actions have hurt all of America and brought attention to the fact that our environment is precious.

When the oil crept into the marshes of Louisiana’s wetlands it entered the food chain with its toxic poisons since 400 species of wildlife live there.

It isn’t just the fishermen that the media focuses on who are losing their livelihoods. Down on the gulf we’re dependent on tourism and the oil leak is in the process of destroying that. Who wants to come to beaches that are coated in black oil?