Ohio has lead the nation demolishing homes that have been left abandoned in hard hit neighborhoods in the U.S. real estate collapse. 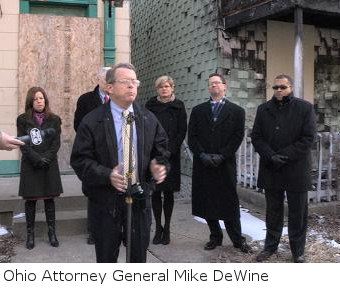 The state’s attorney general is now taking the program to an aggressive new level to demolish up to an estimated 100,000 vacant homes.

The funds for the program are provided through the $25 billion settlement the nations biggest five banks reached with states in the robo-signing scandal, which involved foreclosure abuses, fraud and deceptive mortgage practices. Ohio is devoting $75 million to the program.

“Ohio’s communities have been hit hard by the mortgage foreclosure crisis,” said Ohio Attorney General Mike DeWine. “The guidelines we are announcing today will begin the process of getting funds to local communities so that some of the problem properties can be demolished.”

The amount made available to each county will be based on the number of foreclosures suffered from 2008 through 2011, and awarded to launch housing demolitions in August. Cleveland launched the first home demolition program in the nation showing homes abandoned in the foreclosure crisis, and got major press coverage for it, including a report on CBS 60 Minutes.

“One of the biggest things holding this state back from moving forward is the vast number of abandoned and vacant homes littering Ohio,” said DeWine. “They are blight on our communities, rotting them from the inside out. Our new grant program will help free our neighborhoods, urban and rural alike from the blight that is paralyzing them.”

The program requires that organizations apply for the funds through a specially set up entity such as a land bank or local government sub-office to receive funding for each county. State officials hope to demolish up to 100,000 estimated homes and other old residential structures, including some apartments that are rotting as a result of being vacated in neighborhoods throughout Ohio.